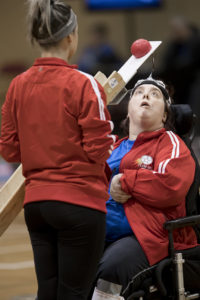 (Longueuil, QC) Following the first day of individual competition at the Canadian Boccia Championships ten athletes head into day two undefeated. The game of the day was between young Rio Paralympic rookie Marylou Martineau (Quebec) and two time Paralympic medalist Alison Kabush (British Columbia). Kabush, a veteran athlete who had stepped away from national competition for the past six years, faced up and coming star Martineau during pool play in the BC3 division.

It was a very close match with each athlete trading off single points in each of the first three ends. Kabush seemed to have maintained her form despite the time away, but found herself trailing 2-1 going in to the final end. She strategically placed the target ball deep in the court to put the pressure on Martineau and both athletes struggled with their accuracy at the long distance. Martineau ran out of balls with Kabush scoring one point. Kabush made multiple attempts to land another scoring ball for the win but could not find the zone.

In overtime, Martineau placed a solid blocking ball, putting Kabush in a difficult position to hit the jack. Kabush plugged away with her remaining balls but was ultimately unable to get past Martineau’s defence.

“I am feeling relieved. I was stressed in the fourth end and I forgot little things like good head positioning. What helped me was my opponent had a bad last ball,” commented Martineau upon finishing her match.

With fifty-eight games in five divisions, it was a busy day at the CEGEP Edouard Montpetit in Longueuil.  In BC1 play, three athletes are in a great position to the see the podium tomorrow afternoon. Hanif Mawji (British Columbia), Jamie McKee (Ontario) and Keven Smith-Worthylake (Ontario) all went undefeated in pool play. It’s a particularly impressive record for McKee, who was recently reclassified from the BC2 to BC1 classification and is playing in his first championships in the new classification. He has shown great confidence, playing well against 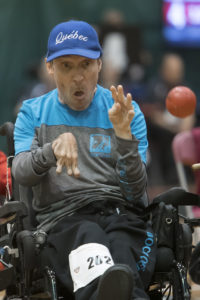 In BC2 play, Adam Dukovich (Ontario) and Benoit Ostiguy (Quebec) also start tomorrow off with zero losses. Though they will not face each in pool play, there’s a strong chance that they will meet in the play-offs.

Pool play in the BC3 classification was completed by the end of the day. Players in this classification are unable to throw the ball and use ramps to play. It was blue across the board, with three athletes from Quebec finishing undefeated in their pools. Eric Bussiere (Quebec), Giancarlo Bizzarro (Quebec) and Bruno Garneau (Quebec) all head into the quarterfinals tomorrow at the top of their pools.

Leading the BC4 classification, both Marco Dispaltro (Quebec) and Caroline Vietnieks (British Columbia) head into day two undefeated and hungry for a medal.

Day two continues tomorrow with the final pool matches in the morning and qualification rounds early in the afternoon. The schedule and results can be followed at www.canadianbocciachampionships.ca. Live stream is available at http://tvgo.ca/boccia/ .