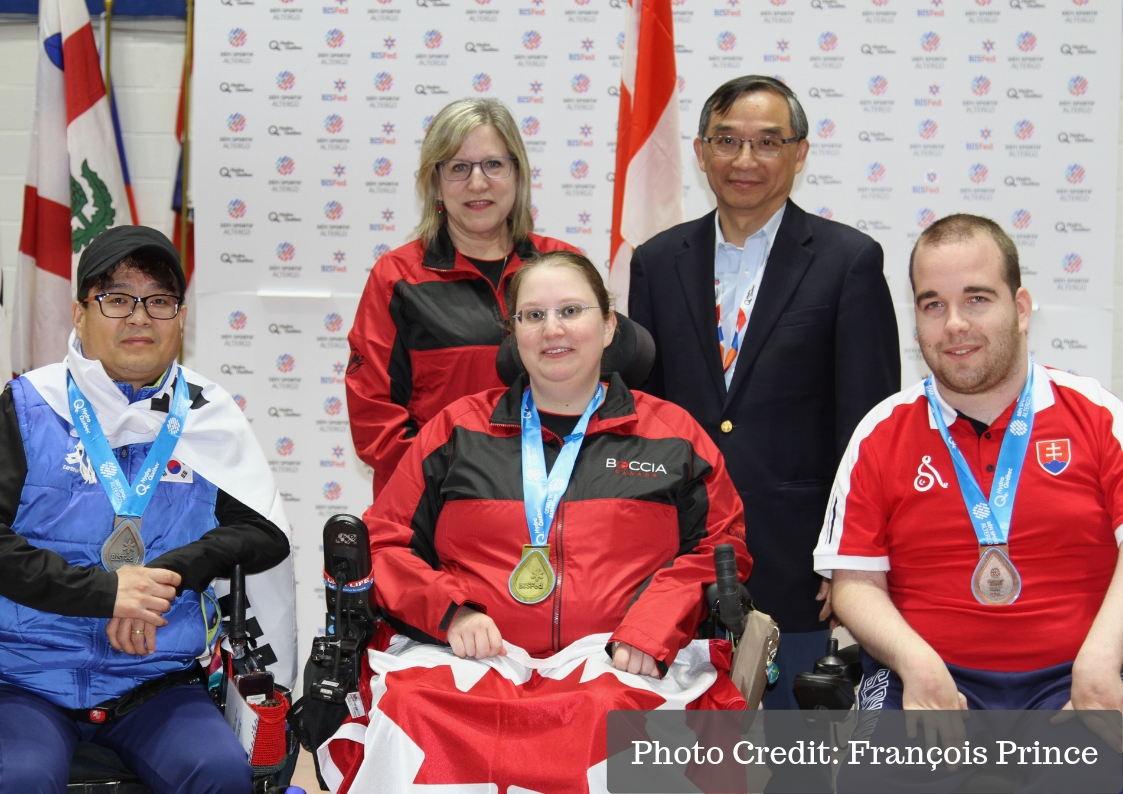 Montréal, May 2, 2019 – It was a gold medal day for Alison Levine of Canada, now the number 3 ranked BC4 boccia player in the world. Despite an early scare in pool play from her Brazilian opponent, Levine appeared to pick-up strength as the tournament entered the elimination round. A 5-2 quarterfinal win followed by a closely contested 4-2 win in the semi-finals against number 6 ranked Boris Nicolai of Germany, had Levine heading to the finals against Seong-yuk Jang of South Korea. Jang, who defeated Marco Dispaltro (St. Jérôme, QC) in the quarterfinals, received a yellow card in that match regarding a ball violation during a random check. Then, in a bizarre repeat of events just prior to the finals, another ball check was made, where Jang received a second yellow card, resulting in an automatic disqualification from the competition. In both instances the balls did not pass International standards testing and the judges ruled the softness of his playing balls would give him a competitive advantage, so Levine, without throwing a single ball in the finals, took home the gold.

As for the strange twist of events, Levine explains, “Part of being an athlete is being responsible for your equipment. I was responsible for my equipment in making sure it was in order. The win is a great boost for our confidence moving into the pairs and team events.” Levine will be paired with Dispaltro and Iulian Ciobanu (Montréal, QC), who finished the event with a 1-2 record.

BC4 coach, César Nicolai believes that the future is bright for Levine: “It’s the first time Alison has won a gold medal at a Boccia World Open and she’s following the logical progression. She won a Bronze in 2017 and silver in 2018. Alison is improving and it’s great to see.”

Perhaps the surprise and feel good story of the tournament was newcomer to the National Boccia Training Squad, BC2 player Danik Allard (Bois-des-Filion, QC). The 18-year-old captured the hearts of spectators with his enthusiasm which carried him into the bronze medal match, ultimately succumbing to the 15th ranked BC2 player in the world. Training partners Kristyn Collins and Mike Mercer (St. John’s, NL) put in a strong showing in the BC2 class, demonstrating progression on the international stage.

Allard was proud of his accomplishments at the Montréal World Open and explained, “I feel that I definitely showed what I was capable of.” Mario Delisle, National Team Head Coach is excited about Allard’s future on the team, “Danik was particularly surprising and I cannot wait to see the impact of his presence in the team event as the tournament continues.”

In the BC1 classification, despite strong efforts from both Josée Lamothe (Montréal, QC) and Lance Cryderman (Val Caron, ON), neither were able to advance to the elimination round, although Cryderman finished the pool play with a 2-2 record. Despite the results, BC1 Coach Ed Richardson is hopeful for the future. “Lance returned to the National team after a 17-year break from competition but he has a lot of experience under his belt. Josée persevered despite some setbacks at the competition, but won several ends. Both should be proud of their performance today.”

The BC3 class included Joëlle Guérette (Montréal, QC), Philippe Lord (Blainville, QC), and Éric Bussière (Verchères, QC). Participating in her first International competition, Guérette’s first match was against the second ranked BC3 player in the tournament, Evelyn de Oliveira of Brazil. Demonstrating the skill and patience of a veteran, Guérette stole a point in the last end for the victory. In the elimination round, Bussière was Canada’s last medal hopeful in the BC3 category, but bowed out in the quarterfinals. “Although disappointed with the loss, I played well, stuck to my game plan and made it difficult for my opponent, noted Bussière. I’m now focusing on success with my teammates in the Pairs portion of the event starting tomorrow.”

The Individual event has officially finished for the BISFed 2019 Montréal Boccia World Open. Next-up, Canada will face its rivals in the Pairs and Team Event portion of the event on Friday and Saturday at the Maurice Richard Arena.