Boccia Canada – Liverpool, England (August 14, 2018) – Alison Levine continued her excellent performance with two significant victories today, in the round of sixteen and the quarterfinals at the BISFed 2018 World Boccia Championships. Teammate Eric Bussière (Verchères, QC) came-up short of victory against Grigorios Polychronidis from Greece, losing in the round of sixteen and is now eliminated from the competition.

Bussière had played a strong tournament to date prior to facing the number one BC3 player in the world, Grigorios Polychronidis from Greece. Polychronidis started the match with a bang, grabbing three points in the first end. The Greek opponent’s accuracy, precision and overall game knowledge was difficult to manage for Bussière. Bussière learned a lot in this tournament and especially about the approach the second world best player is using in an 8-0 loss. “Despite the loss, I am quite proud of the way Eric played,” noted BC3 Coach Kristin Dorrance. “We had a game plan and Eric stuck to it, just missing a little bit on execution. But we are leaving the tournament with our heads held high and knowing that we have identified what we need to do to breakthrough and hit the top ten in the world.”

In a rematch from the 2017 Kansas City World Open, Alison Levine (Côte-Saint-Luc, QC) was pitted against fellow BC4 player Davor Komar from Croatia. Levine controlled the flow of the game, giving Komar only one chance to score in the final end. According to BC4 Coach César Nicolai, only allowing Komar to score one point is demonstrative of great defence from Levine.

With her morning victory, Levine earned a berth to the quarterfinals against Pornchok Larpyen from Thailand, the number two world ranked. The two had previously met at the 2016 Paralympics in Rio, coincidentally also in the quarterfinals.

In this World Championship quarterfinal matchup Levine was down 1-0 after the first end and upset due to making strategic error.  Despite putting herself in some trouble, her opponent couldn’t fully  capitalize and grabbed only a single point. Levine came back strong in the second end on her own jack, placing her first ball extremely well, where her opponent was unable to move it. The back and forth match between the two competitors was extremely close throughout, where the Head Referee was required to verify two or three times the measurements.

Not surprising in a closely contested match between these two world class athletes, that after the fourth end, a tiebreaker end was required. In the extra end Larpyen took control of the jack quickly and effectively blocked all access to the jack with his fifth ball. Levine still had four balls left, and she attempted to make a displacement shot without success. With her fourth and fifth ball, she changed strategy and tried to throw a lob but without success. Her sixth and last ball was a total success. 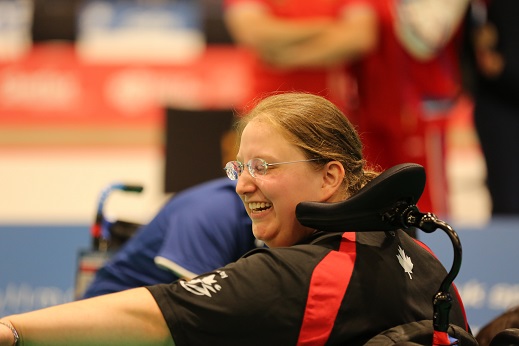 “On my last ball I threw an absolutely perfect lob,” declared Levine. “He had one ball left, and he tried to make a push but it wasn’t enough.” The crowd went silent as both Levine’s and Larpyen balls touched the jack. The referee needed to consult with the Head Referee to determine the winner of the game by mere millimetres. After a discussion, the referee stated one point for blue, and the Team Canada crowd roared in unison throughout the stands and overheard across the world on the livestream.

“I’m feeling absolutely ecstatic right now; it was such a nail bitter for my last game today.” acknowledged Levine.  At the 2016 Paralympic Games in Rio, Larpyen ended Levine’s run in the quarterfinals, and now she got to return the favor at the quarterfinals of the 2018 BISFed World Championships.

“The amount of support from the Canadians here cheering us on every single game and yelling TEAM CANADA has really given me that extra little something special. This has allowed me to bring my best and feel super supported and confident on the court. I came out on top and I couldn’t be happier,” added Levine.

Coach Nicolai is proud of everything Alison has accomplished so far. “With her performances today, she has showed everyone that she has her place amongst the best of the world.”

Tomorrow Levine continues her pursuit for the gold medal, but first she will need to compete against Yusansen Zheng from China in the semi finals.

Livestreaming of the event is available at, https://www.youtube.com/watch?v=S585zUwDG0g.  For a full list of today’s results, consult www.BISFed.com

Round of sixteen finals

Round of sixteen finals