A SUCCESSFUL ONTARIO BOCCIA PROVINCIAL CHAMPIONSHIPS THIS PAST WEEKEND 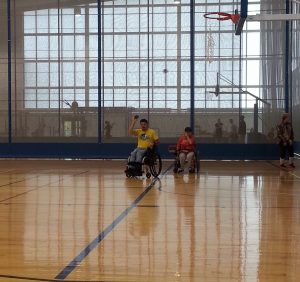 (Whitby, ON) This past weekend some of the best boccia athletes in the province gathered at the Abilities Centre in Whitby, the location of last year’s Parapan American Games. Hosted by the Ontario Cerebral Palsy Sports Association (OCPSA) the tournament consisted of nearly 30 athletes, ranging from those  attending their first sanctioned tournament, to boccia National Team Training Squad members. It was a great weekend of strong competition, learning and fun for all the athletes and the over 40 volunteers involved.

“We were excited to host the event for the largest contingent in years as athlete registration was up 63% compared to last year!” states Amanda Fader, Director of OCPSA. “It’s obvious that the local clubs, including programs at the Abilities Centre and the Main Event Sports Club, are dedicated to athlete development which is extremely encouraging.”

The event represented an important opportunity for all the athletes to earn provincial ranking points which are included in the National Ranking System and the prospect to be on the boccia National Team Training Squad.

Only the BC2 and BC3 category had qualification rounds starting Sunday. Tammy McLeod of London won for the BC2 category defeating new comer to the sport, Jim Davis of the Brock Niagara Penguins, 11-1. McLeod was a tough competitor as she is a long-time member of the National Team Training Squad, but Davis put up a hard fought battle making great placed shots and playing solid defense. It was a very strategic and patient game played by both athletes creating a very high calibre final.

McLeod comments, “I played really well for the whole tournament. I am really happy with my performance especially in the qualification rounds. It was really encouraging to see a lot of new talent coming up from the clubs and new faces in Ontario.” 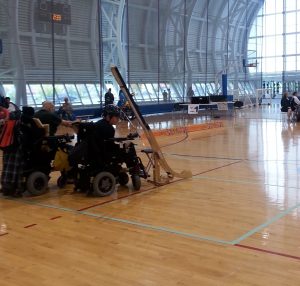 In BC3 play, former National Team Training Squad member Kevin Shaw took home the gold while newcomer to the sport Luigi Lisciandro of Scarborough took home silver. It was a very close final match with the score tied heading into the final end. Shaw was able to capitalize, scoring two points to take the victory 4-2 in the fourth end.

Overall the tournament saw a lot of new faces which is a testament to the boccia programs in Ontario. For many, this was the ‘big show’ and the end of their season while looking ahead with anticipation to sthe start of the next boccia season. For others, they look ahead to the Canadian Boccia Championships in Longueuil, QC in March, where they will have a chance at competing against the nation’s best boccia athletes.

A SUCCESSFUL ONTARIO BOCCIA PROVINCIAL CHAMPIONSHIPS THIS PAST WEEKEND