Home province British Colombia finished the final day of the 2016 Canadian Boccia Championships in Surrey, BC with two gold medal clinches from Paralympians BC1 Hanif Mawji and BC3 Paul Gauthier. Another Paralympian, Adam Dukovich, of Ontario, sailed in to take the gold medal in the BC2 classification while Quebec coloured the podium in the BC4 classification. Former World Number One BC4 Marco Dispaltro and bronze medal winner at the London 2012 Paralympic Games in the pairs division, left with the coveted gold. 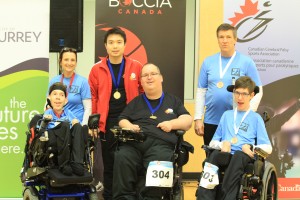 Of his performance, a smiling Paul Gauthier says, “it was an awesome nationals for me. Being a veteran of twenty three years, it’s great to see all of the up and coming athletes and to know I can still win the gold! In the gold medal match I was able to make a key shot where I was able to get my ball to jump over another ball to score 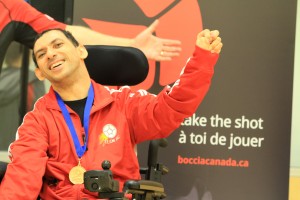 an additional point that contributed to my victory.”

Hanif Mawji quips, “I came out first in pool play and played well against Josee Lamothe of Quebec. The finals against Ontario’s Keven Smith-Worthylake started pretty tight in the first two ends but I was able to move ahead 5-1 by the close of the third end – and eventually took the gold medal game”.

Proud British Colombia coach Shannon Sydorak says “to leave the competition with two golds, and a top four finish for my other BC1 athlete, is really meaningful. That being said, players from across the country warrant a nod for outstanding play. There were so many tight games throughout the weekend – Canada certainly isn’t short of raw talent”.