Boccia Canada – Liverpool, England (August 13, 2018) – Canadians Alison Levine (Côte-Saint-Luc, QC) and Eric Bussière (Verchères, QC) are heading to the round of sixteen finals at the BISFed 2018 World Boccia Championships. Despite solid efforts, teammates Hanif Mawji (Burnaby, BC) and Philippe Lord (Blainville, QC) have been relegated to the sidelines for the remainder of the individual competition.

In her third and final match of pool play, Levine, the world seventh ranked BC4 player, early on made an incredible 1.5 meter push to open up the game and block her opponent at the same time, setting the tone for the remainder of the match. BC4 coach César Nicolai spoke highly of her performance, stating that almost all her placements throughout the game were perfect. “After her warm-up, we could sense that Alison was ready and motivated to have a great game”, stated Nicolai. Levine earned her third straight victory, leaving her undefeated in her pool at the World Championships.

“I am very pleased with how I’ve played in the pool stage here at the World Championships. I have stuck to my game plan and have played every game so far with confidence. I feel strong and ready for the 1/8 finals tomorrow.” 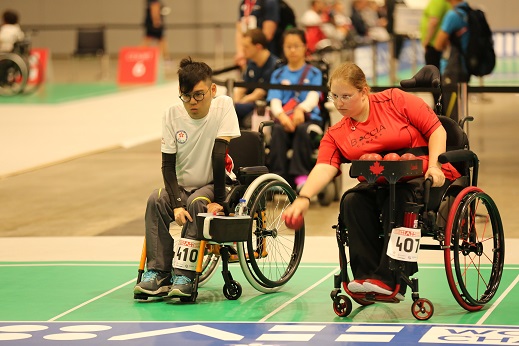 Levine is looking forward to her next match, against rival Davor Komar from Croatia.  Levine and Komar have history and a rivalry dating back to the 2017 Kansas City World Open, where Levine controlled the game and won the bronze medal. “I know it will be a tough game because he will want some revenge, but I know if I play like I have these last two years, I will come out on top,” added Levine.

BC3 National Team member Lord is showing signs of improvement in the individual competition that was not indicative of the score in his final pool match, a 8-0 loss against Anna Ntenta from Greece. BC3 coach Kristin Dorrance is happy with the progress Lord has made in only three short weeks since the World Open in Portugal. “We are seeing a lot of improvement in his game and his decision making and are looking forward to the future with Philippe.”

Bussière competed in a close contest against second ranked Jamie McCowan from Great Britain. The two have faced each other three times in the past year, and Bussière has been unable to solve his British opponent. According to Dorrance, despite the loss in a very well played 4-3 loss, there were plenty of positives. Bussière trailed going into the fourth end by a score of 4-1, and narrowly missed tying the score, coming up short by tallying two points. He will advance in second place from his pool and face number one ranked Grigorios Polychronidis from Greece. 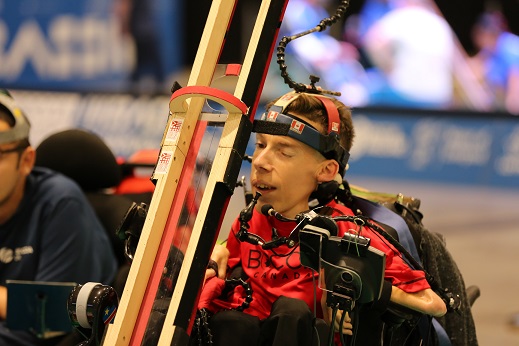 “It will be a tough competition, but we are confident in Eric’s abilities and we looking forward to see what he can do against the top player in the world, added Dorrance. “At this event, it is the best of the best, and it is great to see Canada stepping up to the challenge and showing what we are able to do.”

In his final BC1 pool game, Mawji didn’t capitalize against Guilherme Moraes from Brazil, who appeared to be beatable today. Mawji was unable to consistently place his first ball effectively leaving many openings for his opponent to capitalize, especially in the first end when Moraes stole three points. As a result, Mawji chased the score for the remainder of the game. “Hanif appeared to be low on energy today, having to play first thing in the morning and then the last match of the day, with both being close matches,” expressed Head Coach Mario Delisle. “However, he will place approximately in twentieth, which is very close to his current world ranking slot.”

Individual competitions heads into the elimination portion of the contest tomorrow. Two Canadians, Levine and Bussière will continue their quest for gold.

Livestreaming of the event is available at, https://www.youtube.com/watch?v=4bg5lMympLw . For a full list of today’s results, visit www.BISFed.com