(April 28, 2016- Montreal, QC) It was a busy day for Team Canada as all twelve athletes saw action on the first day of individual competition at the Boccia World Open at Defi Sportif AlterGo. Canada finished the day with a total of 12 victories and 6 losses for a strong start to the individual competition.

Philippe Lord (Montreal, QC), Mike Mercer (Grand Falls-Windsor, NL) and Josee Lamothe (Trois-Riveieres, QC)  made their international debut in individual play. Lord had a tough first match against Yejin Choi of Korea but he was able to put up a great defense and keep the game close. “Philippe played a great match and has gained valuable experience that he is taking forward into the rest of the tournament. For his first international competition he acted and played like a veteran” said Kristin Dorrance, BC3 coach. Although it was a challenging first day for Mercer and Josee, both are looking forward to continuing to advance their skills at the international level as the tournament continues tomorrow. 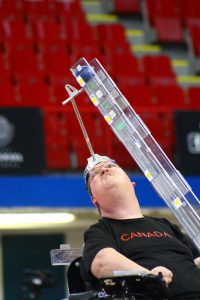 “It was a grudge match between Samir Van Der Beke from France and I as I had an opportunity for revenge for their victory in the pairs. It was a battle of long vs short shots and I asserted my supremacy over the court. I dominated the short game and all the stars aligned for me as I was able to knock him out of the competition. I will need to stay focused as I will be taking on the No. 2 ranked Korean, Han Soo Kim, tomorrow.”- Paul Gauthier.

In BC4 play, all three Canadians triumphed, placing them in a good position to advance to the elimination round. Marco Dispaltro (Montreal, QC) and Alison Levine (Montreal, QC) won both of their matches. Levine struggled with the early morning start in her first match, but was still able to come out on top, and played a stronger game in her second match against Nobuyuki Kozmin of Japan, “Later in the day, my body finally woke up and I had an amazing game where I was able to take control early, set up great blocks and hide or open up the jack whenever needed.”

Looking ahead at tomorrow Levine adds, “Tomorrow I play my final pool game against the also undefeated Slovakian. If I play like I did today I’m confident I can come out on top, win my pool, and pass directly to the semi-finals on Saturday!”

BC4 athlete Iulian Ciobanu (Montreal, QC), started out with a challenging loss in his first match (4-6) but stepped it up and brought his game to the second match of the day against Michaela Balcova of Slovakia. At one point, Ciobanu was four points behind, but came back to win the game in overtime on his last shot. “After the second end, with confidence I was able to win the other two ends and take my opponent in overtime. In overtime I managed to push on the last ball of the match to win the victory.”

All players are motivated for the second day of individual competition tomorrow where pool play continues. The medal rounds will take place Saturday April 30th at Maurice Richard Arena.

Final scores for each individual match can be found on the Boccia Canada Facebook page.