CANADA STEALS THE SHOW IN COLOMBIA 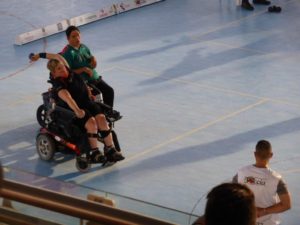 (Cali, Colombia) Playing late into the night, Canada shone on the first day of individual play at the Americas Boccia Championships with an incredible thirteen wins and just two losses. The day started with back to back wins from Adam Dukovich (London, ON) and Marco Dispaltro (St. Jerome, QC) and the team didn’t look back.

In the BC1 division Hanif Mawji (Burnaby, BC) and Joseé Lamothe (Trois-Rivières, QC) played one game each. For Lamothe’s first individual game on international soil, she faced Eduardo Ventura of Mexico, ranked in the top 20 in the world. Showing great composure, Lamothe took control of the game in the third end when she pushed two balls into the jack to steal three points and a 4-2 victory.

“I felt very confident and calm throughout the game. I did get a little nervous in the last end when Eduardo picked up his game,” comments Lamothe. “I stayed in my zone and I concentrated on the game and tuned out my surroundings. I feel great and I am very happy! Looking forward to tomorrow.”

Mawji faced Andres Diaz from the host country. It was looking like another Canadian win as Mawji had the winning point in the last end, but with his last ball Diaz nailed the jack to steal the game in the final seconds.

In BC2 play, Adam Dukovich left undefeated. After starting the day with an 8-3 win against Colombian Alvaro Gutierrez, Dukovich was calm and relaxed as he faced Jesus Oseguera of Mexico in his second game. Oseguera came through with some miracle shots but was repeatedly shut down by Dukovich. In the final end the game remained tight.  Dukovich had the winning point, but there were many other balls nearby and Oseguera still had one ball left. With the crowd on the edge of their seats, Oseguera lobbed his final shot over the pile of balls and missed the jack. The crowd went wild as Dukovich won the game.

“I feel awesome! The turning point came in the first end when I stole a point on his jack which threw him off his game,” commented Dukovich. “I expect a good challenge tomorrow against Argentina, but I am confident and ready to go!”

Benoit Ostiguy (Montreal, QC) was down two points to Denisse Padilla Martin of Mexico, but scored two points in the final end to tie the game and force a tie-break end. Martin saved her strongest play for last, winning the game in the extra end. 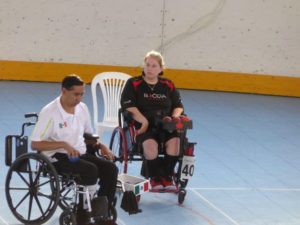 In the BC4 division, Alison Levine (Montreal, QC) and Marco Dispaltro (St. Jerome, QC) carried the momentum from their pairs bronze medal into the individual competition, both finishing undefeated.

CANADA STEALS THE SHOW IN COLOMBIA