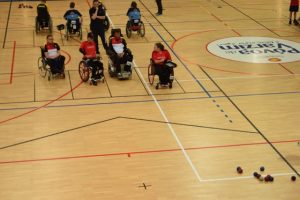 POVOA DE VARZIM- An exciting day in Povoa de Varzim, Portugal as the BC4 pair consisting of Marco Dispaltro (Montreal, QC), Alison Levine (Montreal, QC) and Caroline Vietnieks (Vancouver, BC) took home a silver medal after a well-played game against rival team Brazil. After winning the semi-final against an up and coming pair from Germany 5-4 in overtime, Canada faced Brazil yet again in the final. It was déjà-vu for both teams from the finals at the 2015 Parapan American Games. Humbled by yesterday’s 6-0 loss at the hands of Dispaltro and Levine, Brazil came ready to play. As expected, it was a close match. The Canadians showed their consistency, staying within a point of their rivals through the first three ends, but Brazil put in a strong final push to take the gold with a 6-2 win.

“We played well but Brazil made a few more shots, including a masterpiece throw from two time Paralympian Dirceau Pinto in the third end putting Brazil up by one in the fourth end” said captain Marco Dispaltro. “Overall though, it was a fantastic performance to capture silver, but the best is yet to come!”

BC4 Coach César Nicolaï, pleased with the team’s performance, commented “We played a very tight game against Germany. Germany was very motivated and was tough to beat, but Alison and Marco showed consistency to take the win. Against Brazil in the final we played three excellent ends, but in the fourth we didn’t play our best which made the difference in the game. Overall I’m happy with the level of play and the focus from all three athletes. We’ve sent a strong message about what to expect from Team Canada in Rio.”

As the team and pairs competition wound down, individual play began this afternoon with the BC3 players in action. Eric Bussiere (Verchères, QC) began with a strong win 6-2 win over Poland’s Damian Iskrzycki. It was a tougher start for Paul Gauthier (Vancouver, BC), Philippe Lord (St-Jérome, QC) as they each dropped their first round matches.

Schedule for individual play can be found at www.bocciaworldopen.com