CANADA’S BC4 PAIRS STILL IN CONTENTION FOR THE SEMI-FINAL 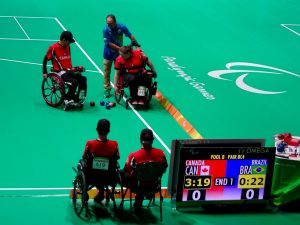 (RIO DE JANEIRO, Brazil) Playing to a sold-out crowd of roughly 8000 fans was something new for Team Canada as they entered Day 1 of boccia pairs competition. It brought out both excitement and nerves for both of Canada’s pairs.

The pair opened the competition against home team and long-time rivals Brazil who were playing in front of exciting fans cheering on their host nation. The BC4 pair includes veteran Marco Dispaltro (Montreal, QC) and Paralympic rookies Alison Levine (Montreal, QC) and Iulian Ciobanu (Montreal, QC). Brazil was able to capitalize on the crowd’s energy early, coming out with two strong ends to take a 2-0 lead. Canada recovered in the third and fourth ends to even the score at 2-2. As the clock ticked down in the fourth end, Brazil threw a Hail Mary shot with less than ten seconds left, placing a ball right on the jack to score their final point and steal the game.

Canada then faced China in their final match of the day, needing a win to stay in contention for the medal round.

It was a game of open the jack, hide the jack. Possession of the jack changed hands often during the match. In the first end, Dispaltro climbed the ball well, but Yuansen Zheng made a successful lob giving China the lead heading into the second end. The second end saw two beautiful shots from both Dispaltro and Levine, which allowed them to pull ahead, putting them in good position heading into the second half of the match. In the final end China played the jack long, placing it eight metres deep into the court, but Canada set up a very good defense and was able to protect the jack, forcing Zheng to make another perfect lob to score for China. It wasn’t enough, leaving the final score 3-2 for Canada.

“I played like it was any other competition” says Levine, “When I started to realize the crowd was really cheering for Brazil, I just looked over at my family, saw them, saw the Canada shirts and said we’re all good!”

This was the first time Canada has beaten China in BC4 Pairs so it has created great momentum as they face World Number 7 Thailand tomorrow morning, where they will be playing for a spot in the semi-finals.

In BC3 play, Canada faced World number 1 team Korea for their first match of the Paralympic Games. It was a big challenge for Eric Bussiere (Vercheres, QC), Bruno Garneau (Montreal, QC)  and Marylou Martineau (Quebec, QC). Garneau, who was a late addition to the team following the withdrawal of veteran Paul Gauthier due to injury, had just a few weeks to prepare for the Games. Although the crowd created an exhilarating atmosphere in the building, it also created communication challenges for Bussiere and Garneau. 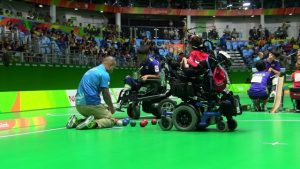 Korea took control of the game in the first end, scoring four points despite good defense from Bussiere. Bussiere was unable to release his final ball due to mishearing the official for the final one-minute call. The second end was stronger for Canada, but the experienced Korean pair was able to find small openings to score an additional two points. Canada recovered to take a point in the third end, but Korea continued to capitalize on their shots in the final end. The final score was 10-1 for Korea.

“This was a good game” said Head Coach Mario Delisle, “The start was a little bit rough, but they played a good offensive game. This Korean team is incredible. They have been at the top of the field for a number of years.”

The second match for the BC3 pairs against host nation Brazil was discouraging, but left the athletes with their heads still lifted high as they look forward to the rest of the competition. Canada had a difficult time protecting the jack this game. Strong offence was played, but unfortunately they were not able to capitalize on their shots. Though the pair is now out of the running for the podium, they are focused on finishing pool play with a win tomorrow against Belgium.

“It was a tough day. We started against World number 1 Korea and then we played Brazil in front of thousands of people. The noise was very intense and despite the loss we learned a lot. It was a great experience to play with my mentor Bruno and with rookie Marylou. Tomorrow we are going to go there and win the game against Belgium and build towards 2020 where we should be one of the teams to beat.” said Bussiere.

Delisle added, “There was lots of learning in very difficult situations for a team that doesn’t have a lot of international experience. Despite the two losses, they gave their best and bottom end, that’s what I am looking for. Fifteen year old Marylou got some playing time today and she did well in the circumstances.”

Tomorrow both pairs are back in action at 10:00 EST. The BC3 pair plays Belgium while the BC4 pair plays Thailand for a spot in the semi-finals.

CANADA’S BC4 PAIRS STILL IN CONTENTION FOR THE SEMI-FINAL