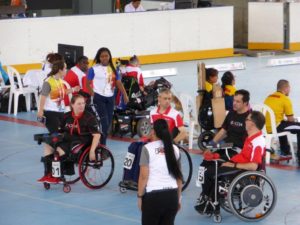 (Cali, Colombia) It was an uneven start, but BC4 Pairs of Marco Dispaltro (St. Jerome, QC) and Alison Levine (Montreal, QC) are heading to the semi-finals tomorrow morning at the Americas Boccia Championships in Santiago de Cali, Colombia.

After an uncharacteristic loss to Mexico in their first match, the BC4 Pair picked up their game and fought through the afternoon heat for a victory over the United States in the second round. Dispaltro and Levine played a very close game trading off points in the first half. Heading into the third end with a 1-1 tie, Canada kicked up their offense, taking two points in the third end and another four points in the last end to secure the victory.

“In the first couple of ends we didn’t take advantage of opportunities and we didn’t play up to our standard,” commented Dispaltro. “It is important for us to score as much as possible in this tournament in order to advance in the pools. Overall I feel good and I am looking forward to tomorrow!”

The last game of the day for the pair was a tight one against Argentina. Facing a must win situation, the pair battled to a 2-2 tie, requiring an extra end. In this end, the jack is placed on the cross in the middle of the court. Dispaltro and Levine created a wall in front of the jack, forcing Argentina to push Canada’s balls into the jack. Argentina fought hard, but ran out of balls. With the winning point secured, Canada dropped their last two balls to signal the end of the match. The pair finished second in their pool and will face host Colombia in the semi-finals. Colombia has had a strong tournament and look ready to give the Canadians a challenge in tomorrow’s  match. 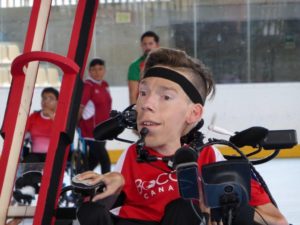 For BC1/2 Team it was an uneven day. After a lopsided victory in the afternoon against Ecuador things were looking up, but after a hard loss to Brazil, the team did not advance. The team, consisting of Hanif Mawji (Burnaby, BC), Adam Dukovich (London, ON), Benoit Ostiguy (Montreal, QC) and Josée Lamothe (Trois-Rivières, QC) played well, but could not capitalize in their last and most important game against Brazil. A bright spot was the performance of Lamothe, playing in her first international competition outside Canada. She helped the team secure five points in the fifth end against Ecuador, leading the team to a 12-4 victory.

Finals for Pairs and Team will be played tomorrow and Individual competition begins on Friday. Live stream and live results are available at www.BISFed.com.