DISPALTRO AND LEVINE WIN BRONZE AND QUALIFY FOR WORLD CHAMPIONSHIPS 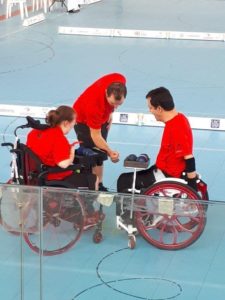 (Cali, Colombia) Marco Dispaltro and Alison Levine came away with the bronze medal today in the BC4 Pairs division at the Americas Regional Championship in Cali, Colombia. The win also earns Canada a pairs slot at the 2018 World Championships.

Dispaltro and Levine started the day with a semi-final loss to home favourites Colombia, and then faced Mexico in the bronze medal match. According to Levine, it was an opportunity for payback after yesterday’s loss against the same pair in pool play.

“They were the only team that beat us in pool play, so we were definitely hungry for revenge against Mexico in the bronze medal match. We did what we had to do to come out on top.”

In the first end, Mexico threw a long jack reaching near the back corner of the court, followed by a scoring shot close to the jack. Team Canada quickly set up a strong defense in order to limit Mexico to one point. Heading into the second end, Dispaltro made a great placement shot on the jack. Mexico snuck past Dispaltro with their first shot, but Levine executed a beautifully calculated power shot to nail the jack, secure the point and push Mexico’s ball out of the way. Mexico exhausted all of their balls but could not get past. That left Canada in scoring position with two balls in hand. Levine made one last dynamite shot to secure three points and finish the end.

With Canada up two points heading into the third end, things were still too close for comfort. Hoping for a repeat of the first end, Mexico placed another long distance jack, but this time Dispaltro quickly surrounded it with three blue balls. Mexico did not back down and continued throwing long, but couldn’t get close enough and ran out of balls with Canada in scoring position. 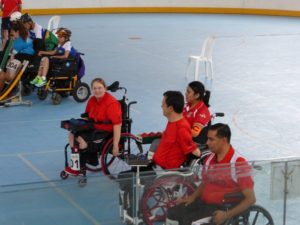 With Canada up 4-1 and having control of the jack in the final end, Dispaltro and Levine focused on placing a good shot on the jack and forcing Mexico to exhaust all their shots. With their last ball, Mexico nailed the jack, stealing one point. Control then returned to Canada who had four balls left. Dispaltro and Levine conferred, and made the tactical decision to drop their last four balls, concede the point and win the match 4-2.

It was a tough competition for us,” comments BC4 coach Cesar Nicolai. “We managed to get out of the pool without playing our best. The semi-final defeat today against the host country was difficult to take but Alison and Marco were able to raise their level of play to take their revenge on Mexico who beat us yesterday. We finished on the podium and that is what we came here to do. Now it’s time for individual competition!”

Tomorrow is the beginning of individual play. For a detailed schedule, see www.BISFed.com for details.

DISPALTRO AND LEVINE WIN BRONZE AND QUALIFY FOR WORLD CHAMPIONSHIPS