Sao Paulo, May 24 2018 – A successful morning that started with two bronze medal victories in individual play was followed by victories for the team and pairs event at  the BISFed 2018 Sao Paulo Boccia Regional Open.

BC1 athlete Hanif Mawji (Burnaby, BC) faced Chile’s German Calderon in the first bronze medal match. After a slow start from both athletes, Mawji took an important lead in the second end. He didn’t look back, stayed calm and grabbed points every end, winning 6-1. Head Coach Mario Delisle noted Mawji was definitely one of the stars of the day.

Benoit Ostiguy (Montreal, QC) competed against Irving Montiel Hernandez (MEX) in the BC2 bronze medal game. After Ostiguy took an early 1-0 lead, Hernandez took control of the play and Ostiguy ultimately lost the match 4-1, placing fourth in the BC2 category.

Philippe Lord (Blainville, QC) missed qualifying for the BC3 semi-finals by a sliver and finished in fifth position. Josée Lamothe (Trois-Rivières, QC) placed ninth in the BC1 category. All these athletes also competed in the team and pairs competition, which began immediately after completion of the individual medal round.

The BC3 pairs and BC1/2 team both began their tournaments against Chile. Martineau and Lord came up with a big 5-3 victory. The BC3 duo played from behind for the first three ends but stayed calm and stole the game with 4 points in the last end. It was a huge confidence boost for the young athletes, who played a tremendous game without veteran athlete Bussière. 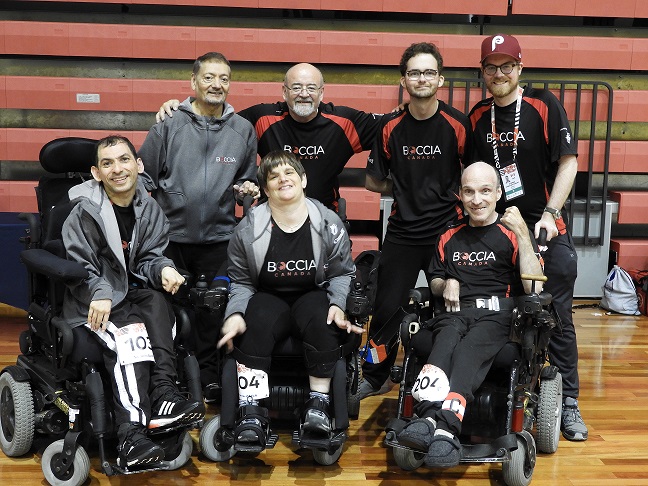 Mawji, Lamothe and Ostiguy then partnered to beat their Chilean opponents 6-5. “Lamothe played an incredible last ball to grab the final available point to push Canada to a victory,” added Delisle. “I am so proud of this team victory.  It is our first one of the international competition year here in Sao Paulo.”  Added Lamothe, “We all worked hard and together to reach this result.” The team played extremely well together, and the communication between the teammates lead to this victory.

Team and pairs competition continues into Friday and Saturday. For a full list of results and schedule, visit www.BISFed.com. Follow live at https://www.spbocciaopen.com/copia-video.

Eric Bussiere (CAN) 0, Marylou Martineau (CAN) 8