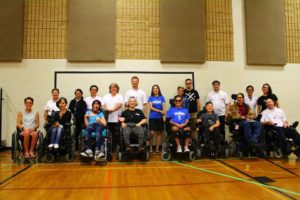 (Calgary, AB) Alberta held its first Boccia Championships this past weekend in Calgary. Each of the competitors were new to the sport with the most experienced athlete having just five years experience in the sport.

While this is the first provincial championships for Alberta, boccia is present in the province’s history, “Alberta has a strong history in boccia with athletes like Arlene Aikenhead and Cliff Wylie playing nationally in the 90’s,” Boccia Canada Program Manager Jennifer Larson said.

The Alberta Cerebral Palsy Sport Association (ACPSA) took a different approach by building the sport from the ground up, instead of starting with competitions. The focus was on having boccia in the various communities through training programs and getting as many people involved in the sport as possible.

This is a positive trend that Larson has taken note of.

“It’s great to see the sport growing again. ACPSA [has taken] such a thoughtful approach to program development to regenerate the program. Rather than jump in to hosting competitions right away, they built a strong foundation by focusing on athlete recruitment, coach training and referee training first,” Larson said. ACPSA tested the waters in 2016 by hosting a fun competition to give athletes and officials a chance to gain some experience before hosting a formal provincial championships.

This approach was a smart choice by the ACPSA said coach Tara Chisholm. “This allowed our players time to grow and really focused on getting people in the sport regardless of their ability,” said Chisholm who is based out of Medicine Hat. “It gave our more competitive players an opportunity to see what a tournament may look like at the higher levels before having to go full board into one,” she continued. 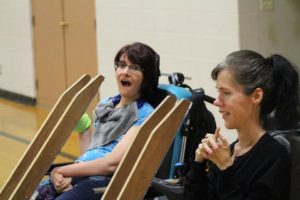 Aiden White was crowned the winner of the inaugural championship and was undefeated in all four of his games. For White’s first competition this is a promising result. White was competing in the BC4 category and said of his experience: “Everything ran on time and everybody knew what they were doing.  It was a positive and supporting environment.”

The 16-year-old has been playing boccia for only a little over two years, meaning that this result could be the start of quite a boccia career. White said he will likely be going to another championship in the fall and hopes to one day compete in the Paralympics.

In second place behind White was another newcomer to the sport Remy Bernier. Bernier has been playing boccia for only eight months and was competing in the new BC5 category.

In the BC3 category for players who use ramps, Chandra Round was the victor with Cyla Schoneck in second place.

With strong roots developed, ACPSA hope to annually host Provincial Championships and are excited to see the potential growth opportunities for the sport in Alberta.

For more information go to: http://www.acpsa.ca/