Boccia Canada – Liverpool, England (August 15, 2018) – Alison Levine (Côte-Saint-Luc, QC) finished her last day of the individual competition at the BISFed 2018 World Boccia Championships just shy of the podium with losses in the semi-finals and the bronze medal match. Levine, currently ranked as the seventh best BC4 in the world, finishes the tournament with an impressive fourth place finish.

In the semi-finals match against Yusansen Zheng of China, the turning point of the game took place in the third end when Zheng made a shot to the side of the jack, leaving it wide open for Levine to take advantage of. However Levine missed her opportunity to capitalize on the open jack and Zheng came back to score four points and take a 6-0 lead after three ends. True to her spirit, Levine continued fighting in the last end, and each competitor earned a point, for a final score of 7-1.

“Zheng didn’t miss one of his throws today, and his execution was absolutely perfect,” stated BC4 Coach César Nicolai. “To win this type of match, you have to be perfect in strategy and execution, which unfortunately wasn’t the case this morning for Alison.” 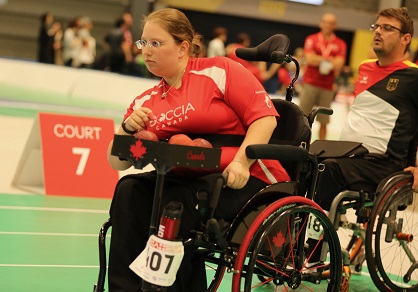 With the loss in the semi-finals, Levine quickly gathered herself and moved on to the bronze medal match against Boris Nicolai from Germany. The two had never met in the individual portion of the competition before, only meeting in the BC4 pairs.

The first two ends were very tight and back and forth on scoreboard.  The high calibre of play was a showcase of boccia at its best. Levine conceded the first point on her jack to Nicolai, and vice versa in the second end. Levine’s last ball in the third end helped her grab an extra point to lead 3-1 going into the fourth end. In that last end, Nicolai threw a great first ball, forcing Levine to move his ball. Unfortunately that ball stayed in her sightlines a far distance away from the jack and was bothersome throughout the whole end. Levine couldn’t access the jack with this blockade, and Nicolai took full advantage of his last three balls to win 4-3 for the bronze medal.

A disappointed Levine pronounced “I had the bronze medal at my doorstep and I just couldn’t grab it.”

Head Coach Mario Delisle is taking a positive approach to Levine’s fourth place finish. “Out of thirty-two players, Alison finished fourth which is quite impressive if you really think about it. We have to stay positive because we start the BC4 pairs competition tomorrow.”

Like any world class athlete and their high expectations of themselves, Levine was upset with her level of play today, firmly believing it didn’t reflect her thrilling performances from yesterday. “That being said, looking back at the competition I know I have nothing to be ashamed of,” expressed Levine. “I have become a high caliber athlete and have proven that I am amongst the best in the world. I’m not slowing down anytime soon though as tomorrow I turn my attention to pairs. Iulian and Marco have been so incredible supporting me in individual play; I can’t wait to do the same with them.”

Levine will make her return to competition tomorrow in BC4 pairs with teammates Iulian Ciobanu (Montréal, QC) and Marco Dispaltro (St-Jerome, QC), who will both make their first appearances at the World Championships. The trio will compete in two matches tomorrow against number one ranked Slovakia and number eight-ranked Russia.  The Canadians BC4 pairs are currently ranked ninth in the world.

Livestreaming of the event is available at, https://www.youtube.com/watch?v=m9sdtvlJft0. For a full list of today’s results, consult www.BISFed.com