BC4 athlete Alison Levine took home a bronze medal on the final day of competition at the Boccia World Open at Defi Sportif AlterGo in her best individual performance since winning silver at the 2015 World Open in Poznan, Poland. 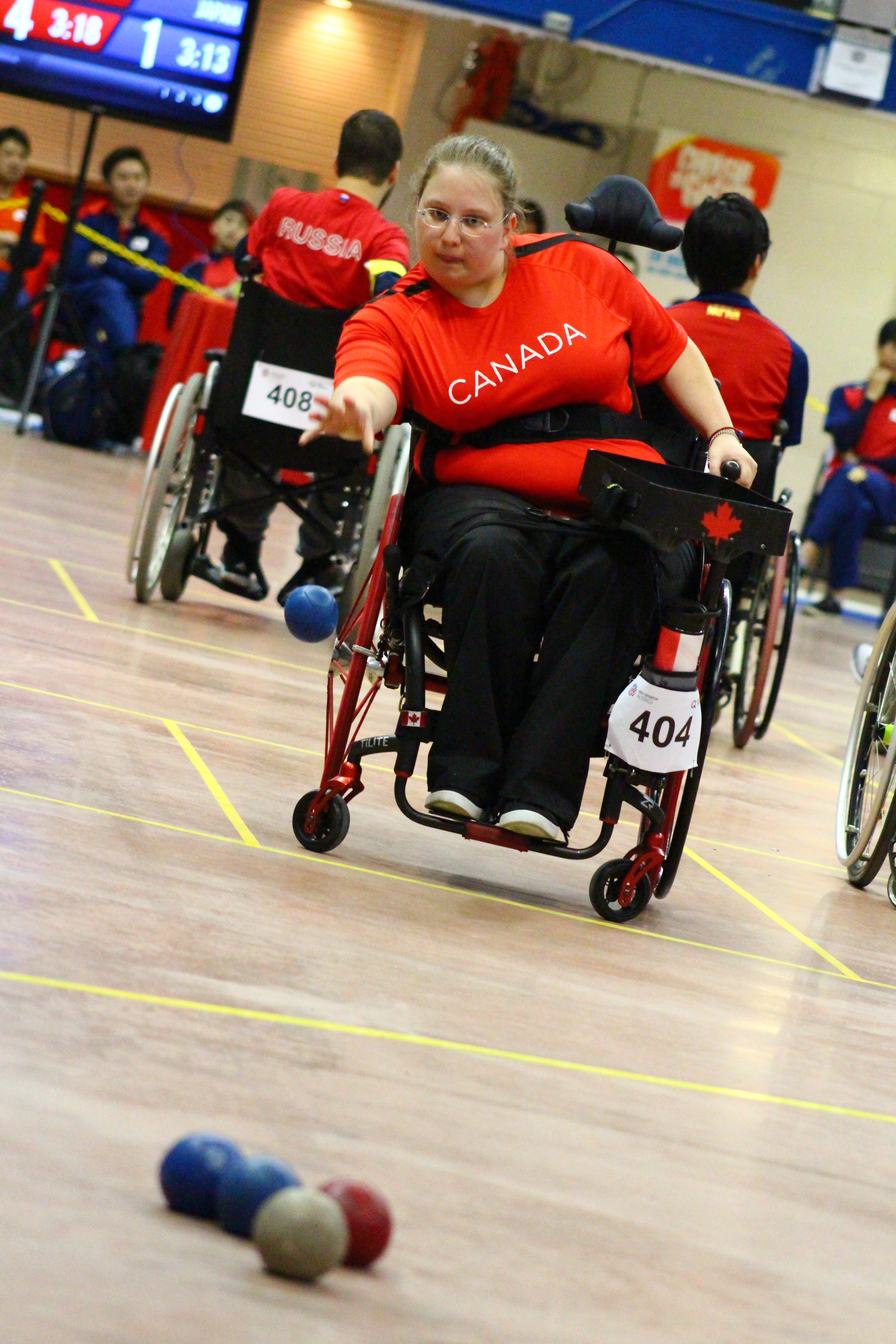 Levine started the day with a strong quarter final game against Russian Ivan Frolov. She was in control throughout and won the game handily 8-1.

In the semi-final, Levine faced Korean Kim Sungkyu. She played well but was unlucky on two displacement attempts in the first end. Kim took advantage and was able to score four points, taking a 5-0 lead into the third end. Levine responded by played a very strong second half, gaining three points in the last two ends, but ultimately could not make up the gap and lost 5-3.

Levine was able to quickly refocus and shift gears to face Australia’s Jean-Paul Lafontaine in the bronze medal match. She came out strong, taking a 3-0 lead over the first two ends, but then had a potentially costly lapse in the third end, giving up three points. After three ends, the game was tied heading in to the final frame. However, Levine is historically a strong finisher, and today was no different. She made a critical shot to take control of the jack, forcing the Australian to go on the offensive with his final two shots. Lafontaine was unable to respond, and Levine secured the bronze to the cheers of her family and friends.

“Alison played very well with lots of confidence during the entire tournament. I’m very proud of what she did here. With two medals here we are in a good way for Rio for sure.” said Cesar Nicolai, BC4 coach.

“I feel absolutely incredible right now. I had my fam
ily, teammates, and friends there to support me and seeing the maple leaves on their shirts gave me that extra motivation to win that medal” said Levine. “I started off really strong with three points in the first two ends but unfortunately I made a mistake in the third. I was able to stay mentally strong and come back and win the game.”

World number five ranked Marco Dispaltro (Montreal, QC) also met Kim Sungkyo, but in the quarter final. Dispaltro won the first end 2-0 but the Korean had a very good first ball in the second end and Dispaltro could not prevail, dropping three points. In the third end Dispaltro changed the pace of the game by playing deeper into the court. The strategy worked and he picked up one point to enter the final frame tied 3-3. In the last end Dispaltro could not retake the point and lost 4-3.

The remaining Canadians in the playoffs, Eric Bussiere (Arthabaska, QC), Hanif Mawji (Burnaby, BC) and Adam Dukovich (Ottawa, ON) also met tough competition and were not able to move on.

As the World Open wound down, head coach Mario Delisle felt optimistic about the future. “We had a mix of 2016 and 2020 potential athletes here and everybody looked good on the courts. Those who will most probably be at the Paralympic Games this year made it into the playoffs and we are proud that we won two medals in the BC4 class.”

The athletes will now return to training and refocus towards the upcoming World Open in Povoa de Varzim, Portugal, and the 2016 Paralympic Games in Rio de Janeiro.

The domestic invitational component of the Defi Sportif also continued today, with athletes from across Canada and the United States competing until Sunday, May 1st. Complete results for the domestic competition can be found online at www.defisportif.ca.