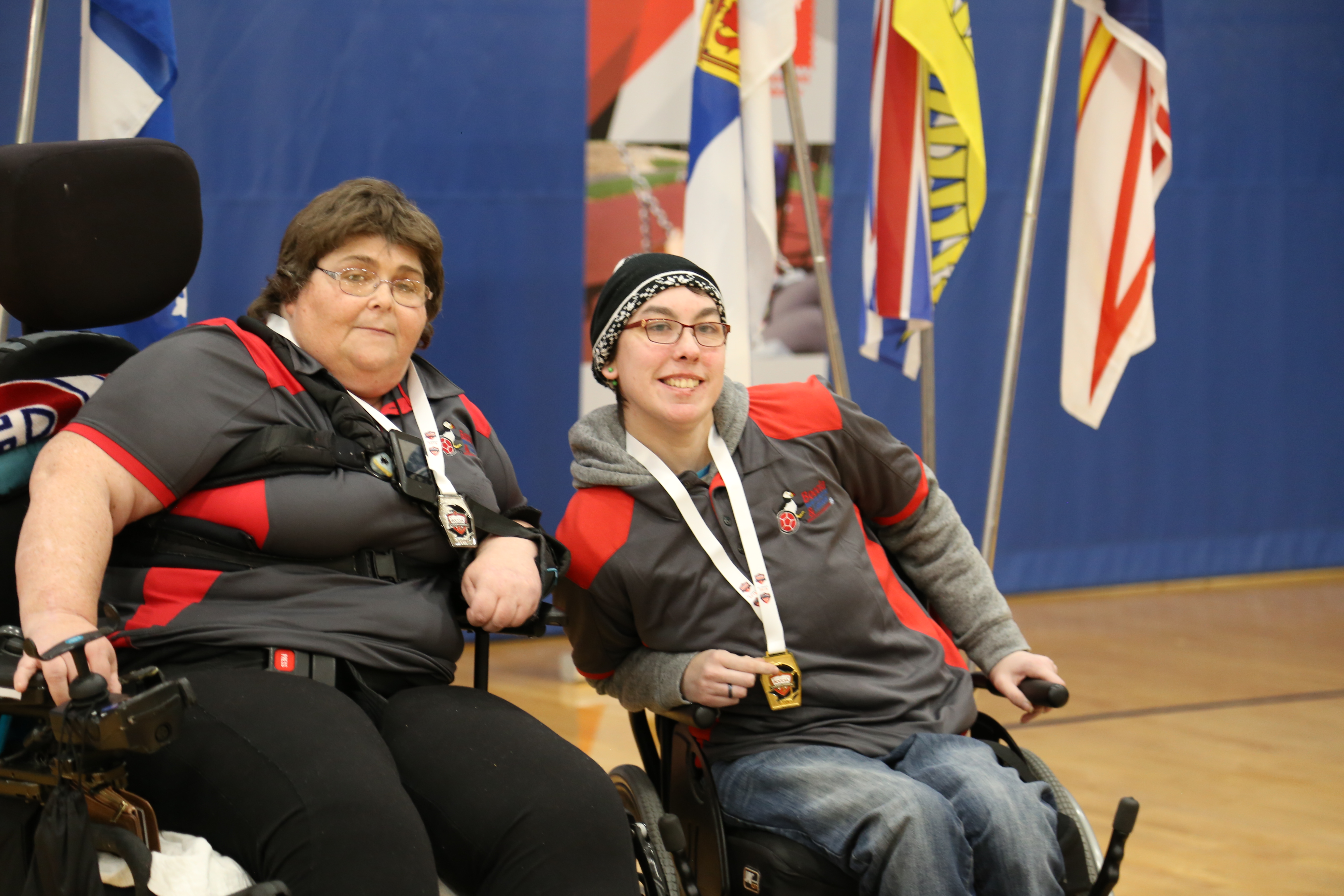 (Nikkie Kennedy (right) and Terri Hefford of St. John’s had a 1-2 finish in the Open Division of the national boccia championships, held in St. John’s over the weekend.)

(November 19, 2018) Every inch around the jack was closely contested in the medal rounds on the final afternoon of the 2018 Canadian Boccia Championships, hosted by Easter Seals Newfoundland & Labrador.  Earlier in the week, gale force winds delayed the arrival of most of the event participants, forcing the cancellation of the team and pairs event.

Veteran BC1 athlete Chris Halpen (Victoria, British Columbia) held steady throughout the weekend and came out on top of a close 3-2 match with silver medalist Lance Cryderman (Sudbury, Ontario).  Halpen has been playing boccia for over 20 years but this was his first trip to the top of podium at the Canadian Championships.

In another first, BC2 athlete Danik Allard (Bois-des-Filion, Quebec) capped off a phenomenal tournament in route to a gold medal. Down two heading into the final end, Allard was able to rally and put three points on the board for a 4-3 final against hometown favourite Mike Mercer (St. John’s, Newfoundland).

In BC3 play, Eric Bussière (Verchères, Quebec) who had to rally in the final end of his semi-final match just to play for the gold, overcame Provincial teammate Philippe Lord (Blainville, Quebec) 8-4.

Alison Levine (Côte-Saint-Luc, Quebec) captured gold in the BC4 class, going undefeated while along the way securing wins over fellow national team members Marco Dispaltro (St-Jerome, Quebec) and Iulian Ciobanu (Montréal, Quebec).  The trio have battled many times in training and competition and they all found themselves on the podium of the 2017 Canadian Championships.

In the BC5 class, Giovanni De Sero (Guelph, Ontario) continued his rise in boccia, securing a gold medal win over Josh Hayes (St. John’s, Newfoundland).  This was the first year the BC5 category was introduced at the Canadian Championships, and with the skill level of the competitors, there is lots of promise and talent in this class.

Eric Lefebvre (Montreal, Quebec) was a most deserving recipient of the Gilles Henry Memorial “Spirit of the Games” Trophy for his sportsmanship both on and off the court.

For a complete summary of the 2018 Canadian Boccia Championships, please visit www.bocciacanada.ca

“I’m so proud of what I’ve accomplished this week,” says Chris Halpen (Victoria, BC).  “I’ve been coming to the Canadian Championships for years, and this is the first time I’ve taken home gold.  It’s been a long time coming.”

“I’ve had a great experience here,” says Danik Allard, (Bois-Des-Filion, QC).  “My Quebec teammates were fantastic and provided me with so much support.  I’m proud of my game and played well.  The gold medal match was tough, and I really had to work hard for the win.”

“This is my sixth Canadian Championship and was a great achievement for me considering the fact that I changed my ramp and my charting method in the last two months,” says Eric Bussière (Verchères, QC).  “My objective was to make the podium, so having the gold medal is for me, a great motivation for the year to come.”

“The 2018 Canadian Boccia Championships was a great opportunity to highlight the introduction of the BC5 class into the event,” says Giovanni De Sero (Guelph, ON).  “With the inclusion of this new class, it gives a chance for athletes that would not be able to compete at this level, the possibility to reach their goals at the National Level.”

“We have seen magnificent shots at these Championships and it was great to see the athletes in action here in St. John’s,” says Mario Delisle, National Team Head Coach. “I am particularly impressed with some potential new athletes for the National Team level and looking forward to rebuilding part of the team for the next Paralympic cycle with this new talent.”

“Considering the very difficult circumstances with weather delays resulting in three days of travel for some to arrive in St. John’s, the athletes, officials, coaches and volunteers did a marvelous job,” said Cluney Mercer and Tony Redmond, Co-Chairs, Host Organizing Committee.  “It couldn’t have gone any better.   Even with the travel delays, these inspirational athletes kept smiling and had a lot of fun.”

“The athleticism on display this weekend was truly incredible as we celebrated the 25th Anniversary of these Championships,” says Peter Leyser, Executive Director, Boccia Canada.  “Equally so, was the great sense of comradery within the sport.  It’s very gratifying to see the athletes sharing their knowledge, passion and love of the game amongst each other.  A special thank you to Easter Seals Newfoundland & Labrador for delivering a fantastic Championships with the traditional warm and friendly hospitality Newfoundlanders & Labradorians are known for.”