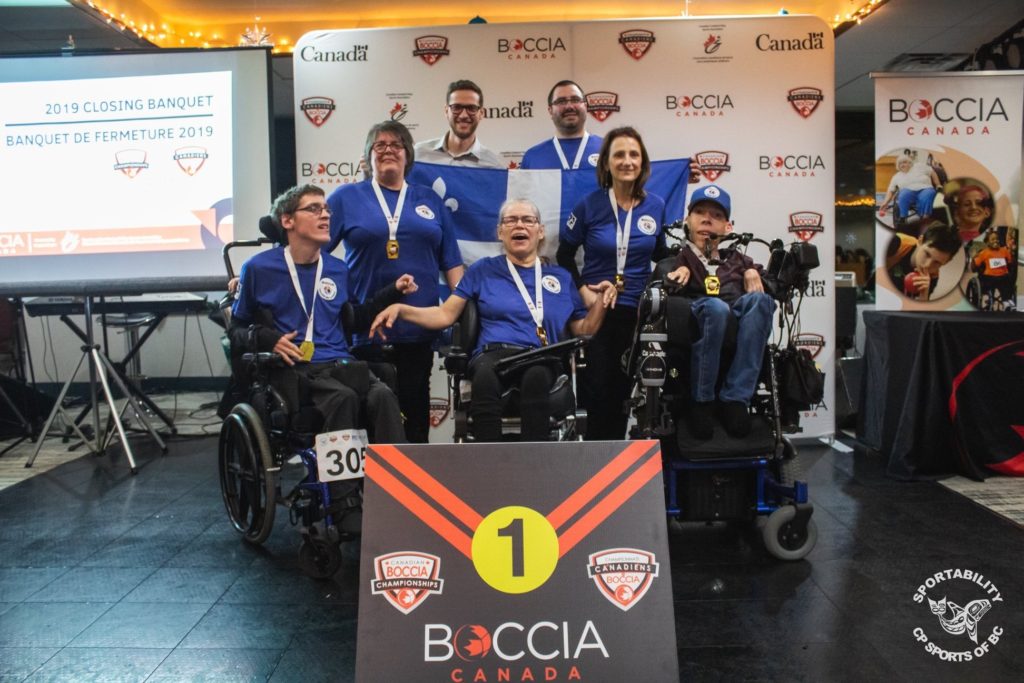 Simard’s first experience at Nationals was a special one: “It was my first [Canadian Championships] and it was fantastic. Even more so because I shared the experience with my son… It has been ten years now that [the doctors] told me I would have to stay in a wheelchair. Ten years later to come in second place in my class and first in team play at this event feels really great.”

British Columbia was well represented in the Open Category, an Individual event. Mildred Thomas (Surrey, BC), who made a comeback into boccia three years ago after a seven-year hiatus, took gold. She was Champion in the Open class at the Western Challenge and BC Provincials this year as well. Her goal coming to the 2019 Canadian Boccia Championships was to “learn from the other athletes,” she explained pre-competition since it would be her first time competing at Nationals.

“My first experience has been fantastic. Watching all of the athletes compete with different disabilities has been amazing and a real eye-opener. It took a lot of determination and I tried to stay confident throughout the tournament. It was a little stressful but I just kept plugging along trying to at least place, which I did in the end.”

Québec continued their march to the top of the podium in the BC3 category. The Québec A Pair consisting of Éric Bussière (Verchères, QC), Joëlle Guérette (Montréal, QC), and Samuel Lafleur (Saint-Dominique, QC) finished first in their pool while Québec B of Marylou Martineau (Québec City, QC) and Philippe Lord (Blainville, QC) took silver. For Bussière, Lord, and Martineau it was their second medal of the event having already reached the podium during the individual portion of the tournament.

With the largest contingent represented at the Championships, Team Québec’s pride and spirit was captured in their chants of ‘“Allez les bleus”. “We are very proud of our team and are a really tight group,” explained Jonathan Manseau, Performance Partner to Guérette. “At competitions we are energetic and supportive, while outside of competition we are all close friends and teammates.”

With the close of the 2019 Canadian Boccia Championships, many athletes are going home with medals earned from the last day of competition in Victoria, BC including:

Visit Boccia Canada’s website for final results in the Individual (BC1, BC2, BC3, BC4, BC5, Open), Team, and Pairs categories.

Visit the Boccia Canada’s Facebook page for pictures from the tournament.