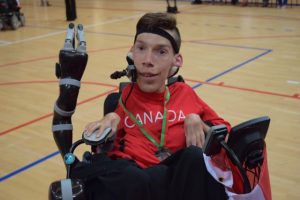 POVOA DE VARZIM- Eric Bussiére (Verchères, QC) served notice that he is an athlete who can perform under pressure, capping off a strong overall Boccia World Open with a silver medal in individual play.

In the round of sixteen, Bussiére faced hometown favourite Luis Silva of Portugal. It was a tight match throughout as the players traded points from one end to the next. As time ticked down in the final end, with the scored tied at three, Bussiére had one last attempt to score and succeeded, taking the game with a 4-3 victory. The celebration was cut short when the Portuguese team lodged a protest on the final ball, alleging that it was released after time had expired. After a tense wait for Bussiere, the protest was overruled and he advanced to the quarter final round.

The tension continued as Bussiére then met Nurulasyiqah Binte of Singapore. Again the game was tied in the dying minutes, and again Bussiere needed to make his final shot to steal the win and break the tie. Under pressure, Bussiere again came through, placing his last ball right on the jack to take the point and advance to the semi-finals.

Facing world number eight Patrick Wilson of Great Britain, Bussiére needed to be ready for any challenge, and he was. It was another nail-biter of a match. In his final shot, facing a jack placed deep in the court, he calmly placed two perfect balls right on target, only millimetres from Wilson’s ball. Bussiére took the win with a nail-biting finish of 4-2.

With a podium finish now guaranteed, it was time to dig down for the gold medal match against World number six Jose Macedo. Macedo, another strong player from talent-rich Portugal, is a veteran with more than twenty years of international play under his belt.

Bussiére took control early in the match, leading 1-0 after the first end. However, Macedo’s experience showed as he responded with strong play in the second end and third ends. Bussiére had the point in the third end and looked poised to turn the match around, but Macedo was able to get past Bussiére’s defence and push his own balls in to score two points and take back the lead. He then closed the door in the fourth end, taking gold with a 6-1 win.

“I am extremely proud of Eric,” said BC3 Coach Kristin Dorrance, “The entire tournament he was on his game- both in execution and decision-making.”

It was a silver lining to a strong overall tournament for Bussiére, who showed poise beyond his years as he capitalized on every shot, took his time, made calculated moves and demonstrated great control under pressure.

In other final round action, BC4 athletes Marco Dispaltro (Montreal, QC) and Alison Levine (Montreal, QC) both advanced to the quarter finals with solid performances in the round of sixteen. Both athletes played Slovakian opponents, with Dispaltro taking a satisfying overtime win over Robert Dukovich, who had eliminated him at the Individual World Championships earlier this year. Both athletes were then eliminated in the quarter final round. Caroline Vietnieks (Vancouver, BC) faced Pedro Clara of Portugal in the round of sixteen, but had a narrow 5-4 loss despite strong play.

“After what I saw today and yesterday and with two more months of training to go before the Paralympics, I am looking forward the possibility of a podium finish in individual play in Rio.”