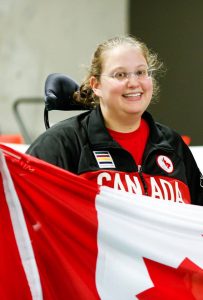 (RIO DE JANERIO, Brazil) A performance of a lifetime is how Alison Levine of Montreal, QC describes her final game at the Paralympics. Coming into her first Paralympic Games Levine is leaving with a proud fifth place finish in individual play. After yesterday’s amazing performance taking her into the quarter finals, Levine was ready to take the stage by storm. Regardless of the score on paper, this is what Levine did, playing the best game of her life against world number six Pornchok Larpyen of Thailand.

“I sure wanted to win, but after that game I think I probably played the best game of my life and it was at the Paralympics! I felt cool, calm and focused on the court. It was my objective to go back home with no regrets and I feel I have accomplished this!” comments Levine through a wide smile at her proud accomplishments in her first Paralympic Games.

Heading into the third end one point down, Levine was ready to strike back. She stayed focused and calm and came back stronger than ever. A mirror of the previous end, control of the jack switched hands multiple times, but Levine made excellent placements and with a beautiful push and tumble she made a displacement with her last ball and squeezed the jack between two of her balls. Larpyen was not able to retake the point with his three balls giving Levine one point to finish off the end.

Entering the final end with a tied score of 2-2 each athlete knew they must win this final end to see an advancement onto the semi-finals and guarantee a chance at seeing the podium. Larpyen made a good first ball and unfortunately Levine was not able to displace it and the ball went off the court. Larpyen, with another shot, was able to successfully place the ball closer to the jack. Levine turned around and displaced it to hide the jack, but Larpyen came back to slice the jack and re-gain control. Recovering quickly, Levine took control with her next shot, but again Larpyen did not allow any wiggle room and made a perfect flop to retake the points. With control of the game going to and fro and limited balls left, Levine tried to ricochet or push and tumble her way to the jack with her final two balls, but could not find the space to reach the jack to take final control. This left Larpyen with two final balls from which he dropped and won the game 3-2. 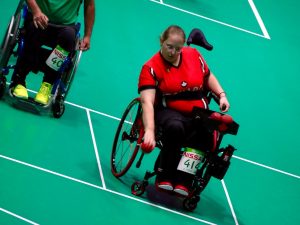 “It was a close game and Alison payed a very high calibre game.” Says proud BC4 coach Cesar Nicolai, “She is definitely in constant progression and this fifth place finish is an accomplishment for her. I am really proud of her as she has shown so much progression during the competition, technically and mentally. She is a really strong athlete and it’s looking great for the future! Bravo Alison!”

Though this loss will finish off Levine’s performance at the Paralympics, she is leaving with a smile on her face and her head held high at her overall achievements.