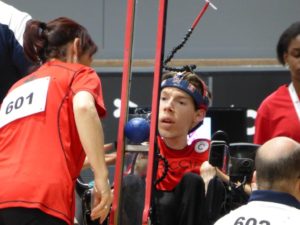 (Montreal, QC) The North American continent took the court today in Montreal, QC for Pair and Team competition. Team Canada had a strong showing on the first day of competition as they went undefeated to take home gold in every division.

The gold rush started with a very close first match in the Team BC1/2 division as Team Canada faced Mexico. Veteran Tammy McLeod (London, ON) started the game flanked by Eric Lefebvre (Montreal, QC) and Mike Mercer (St. John’s, NL). Canada held their own in the early going, though not without some resistance from Mexico. Though Canada appeared to be the stronger team, some offensive miscues and strong play from Mexico kept the game tight, leaving everyone holding their breath.

The game began shifting in Canada’s favour when substitutes Benoit Ostiguy (Montreal, QC) and Lois Martin (St.John’s, NL) entered in the fourth end. Ostiguy immediately made his presence felt, nailing the jack on more than one occasion and providing strong guidance to rookie Martin. Spectators were on the edge of their seats until the very last shot, when Ostiguy nailed the jack to secure a 5-4 victory.

Playing the United States in their second game, the Canadian team took a commanding 5-0 lead in the first two ends. The Americans began clawing their way back in the middle ends, but were held to just two points by a solid Canadian defense. Team Canada held on to add two more points in the final end to put the game away in the final 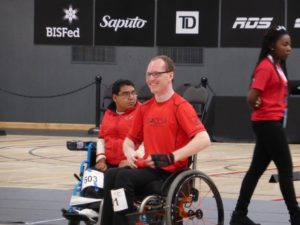 It was another clean sweep in the BC3 Pairs division as Canada dominated against the United States on their home court. The athletes were calm and collected as they faced their southern neighbours twice in one day. In the first game, the Canadian pair of Eric Bussiére (Montreal, QC), Philippe Lord (Montreal, QC) and substitute Marylou Martineau (Quebec, QC), played an accurate and strategic game, placing a ball right on the jack in every end, allowing the American team to exhaust their balls before moving in to score. The Canadians also played solid defense when needed, building a wall of balls in front of the jack to block the Americans’ line of sight. Their strategy paid off with an 8-0 victory. Canada continued to dominate in their second match of the day against Team USA with a 5-2 triumph.

Canada also dominated the BC4 Pairs division with a strong performance from Alison Levine (Côte Saint-Luc, QC), Iulian Ciobanu (Montreal, QC) and substitute Marco Dispaltro (St. Jerome, QC). They had a slow start in the first match against the United States, but the tempo changed quickly when Levine took a huge power shot in the second end to displace the jack. The Americans came back with a beautiful shot that kissed the jack, but the Canadians didn’t break a sweat. Levine quickly lobbed a ball back in, retaking possession and scoring three points. In the third end, the USA surrounded the jack, creating very few avenues for Team Canada to score. Levine assessed her options, and threw a risky powerful lob that displaced the jack into Canadian territory to steal five points and ultimately win 13-0.

“It was awesome!” said Levine, smiling.  “I didn’t miss much and I started strong. The first game of the competition is always difficult, but we were feeling good about it. We knew it wasn’t going to be challenging, but you also can’t take them lightly.”

“Although it was a huge score, it wasn’t an easy game,” said Coach Cesar Nicolai.  “We did the job we had to do to win the game. Now we focus on the next game.”

In their final match, also against the United States, the BC4 Pair maintained their composure, finishing the competition with an 8-0 victory.

Individual competition begins tomorrow at 9:00am at Centre Pierre Charbonneau in Montreal, QC.

Live stream is available for Court 1 on channel 4 at www.tvgo.ca/defi.