Reprinted with permission of DefiSportif AlterGo 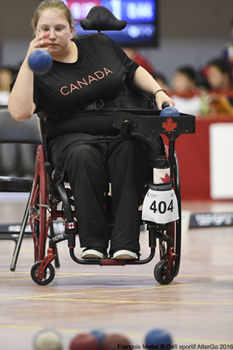 Montreal, April 30, 2016 – After snatching a silver medal this Wednesday in the pairs competition with Marco Dispaltro and Iullian Ciobanu, Alison Levine racked up an individual BC4 bronze at the BISFed Boccia World Open, held in Montreal as part of the 33rd Défi sportif AlterGo.

“First the Poland Open, and now it’s the second time in a year I’ve finished an international competition with two medals,” rejoiced the Montrealer, whose goal was not to come away empty-handed from a competition at home.

In the match for the bronze, the athlete, who’ll be turning 26 years old this coming May 11, beat Australian Jean-Paul Lafontaine 4-3. Her voice and the voice of her fans rang in celebration and resonated all around the Maurice-Richard Arena.

Levine was leading 3-0 after dominating the first two games, but saw her opponent catch up with three points in the third game. The Quebecker then got in the winning point during the final game.

“I made a major mistake in the third game, and he managed to score three points. But I am proud of myself for not throwing in the towel. I thought to myself, ‘come on, it’s 3-3 and it’s not over yet, you can go and get it!’ And that’s exactly what I did.”

After winning the quarterfinals with an 8-1 score over Russian Ivan Frolov, Levine wasn’t able to keep her momentum and lost the semi-finals to South Korean Sungkyu Kim by 5-3.

Kim started out strong, but Levine managed to reduce the gap in the second half of the match. However, it ended up being too little, too late. “He played an excellent first game. He did a great job blocking his line.”

“I’m getting better by the day,” explained Alison Levine, who has changed her tossing technique since last month’s World Championships in China. “It’s been only a month, and the results are already amazing. With four months to go before Rio, it’s a pretty good scenario.”

“Alison came back from the World Champs with a positive attitude, and this week she has proven over and over that she’s at her best,” said Mario Delisle, national team head coach.

Meanwhile, Marco Dispaltro was eliminated in the quarterfinals by the same South Korean athlete who stopped Levine in her tracks.

He finished the competition in fifth place.

In the BC3, Eric Bussière was also shown the door after the quarterfinals, when British Jamie McCowan beat him 4-1. Lagging behind 3-0 after two games, the Verchères athlete had the possibility of scoring two points. “I could have finished that game with the two points, but I tried a more aggressive approach,” explained Bussière. “It ended up proving a bad decision on my part.” The 30-year-old then saw his opponent widen the gap to 4-0 and win the game. Bussière managed to score a point in the final game.

“It was a learning experience for me,” said Bussière, who came in sixth.

“It’s been a great week for our athletes,” said Mario Delisle, who was leading a mix of veterans and rookies at the BISFed World Open. “I saw some beautiful performances from the young athletes, even if they didn’t come to fruition in the way of medals. Their presence on the court was excellent, and we didn’t get disqualified out of any matches.”