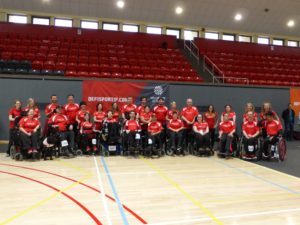 (Montreal, QC) There was a sea of red and white in the medal round at the Montreal Regional Open presented by Defi Sportif AlterGo. With podium sweeps in both the BC3 and BC4 category, Canada cleaned up on home court.

In the BC4 category, it was a race to see which Canadian would land on top of the podium. It became apparent early in the day that at least two Canadians would medal but it wasn’t until early afternoon that Alison Levine (Côte-Saint Luc, QC), overtook Steve Wilson of Bermuda to win bronze and complete the all-Canadian podium.

Iulian Ciobanu (Montreal, QC) captured his first ever international gold medal playing teammate and mentor Marco Dispaltro (St. Jerome, QC). “I felt fine, calm and composed and level-headed. I always keep calm until the last ball is thrown,” said Ciobanu. “This is the first time I have beat my teammate Marco in competition, so I am feeling pretty good.” He took control of the game early on and maintained his composure until the victory was secure, and then dropped his last ball to celebrate the 6-1 victory.

In the BC3 category, it was definite that there would be one Canadian on the podium, but the pressure was on in the final games to see if there would be another podium sweep. It came down to Eric Bussiére (Montreal, QC) and Marylou Martineau (Quebec, QC) to decide the final order. Bussiére quickly took control of his final game against Joey Avellano (USA) for a 10-0 victory. The nail-biter came when Marylou Martineau faced opponent James Miranda (USA). Martineau missed some openings in the first end, and Miranda played an exceptionally precise game in the second end to scoop up four points. Martineau came back in the third but was only able to take one point, going into the final end trailing by one. Miranda continued to have the hot hand in the fourth, placing several balls close to the jack. Martineau stayed calm and continued to work away, scoring one point with her final ball. It was then down to Miranda to try and take back the win with his final balls. As the referee completed the final measurement, the spectators waited in suspense. When the referee showed Martineau scored two points to win the game and complete the podium sweep the crowd went wild.

The gold rush continued when Tammy McLeod (London, ON) overtook teammate Benoit Ostiguy (Montreal, QC) in the final game. After winning gold at the recent Canadian Boccia Championships, she was ready to do it again. It was a close match as the athletes traded the lead from one end to the next. McLeod had a rough first ball to start the final end, but quickly recovered by displacing Ostiguy’s scoring ball and pushing hers onto the jack to win the game and the gold medal.

“I feel amazing. I played like I was on my game,” said an excited McLeod. “I went in thinking ‘I’ve beaten him before’ and I was feeling comfortable. I wanted to play my game and that is what I did. I did what I came here to do!”

Rounding out the medal haul was Eric Lefebvre (Montreal, QC), who won bronze in the BC1 division at his first international tournament since 2002. When the last ball was thrown and Lefebvre’s ball was the only one sitting on the jack, both the crowd and Lefebvre himself erupted with joy.

Following their success at this tournament, the Canadian team will now begin preparing for the Cali Regional Championships in Colombia this August.

Summary of the day: