Boccia Canada – Liverpool, England (August 17, 2018) – Alison Levine, Iulian Ciobanu and Marco Dispaltro’s journey at the BISFed 2018 World Boccia Championships came to an end today in the quarterfinal matchup against Germany, after having previously being undefeated in the competition.

In their final pool play match, the BC4 pairs started the day with a strong showing against the United States. They controlled the game from the start, winning 13-0. Marco Dispaltro (St-Jerome, QC) and Iulian Ciobanu (Montréal, QC) played the entire match against the Americans, who showed little resistance against the Canadians. 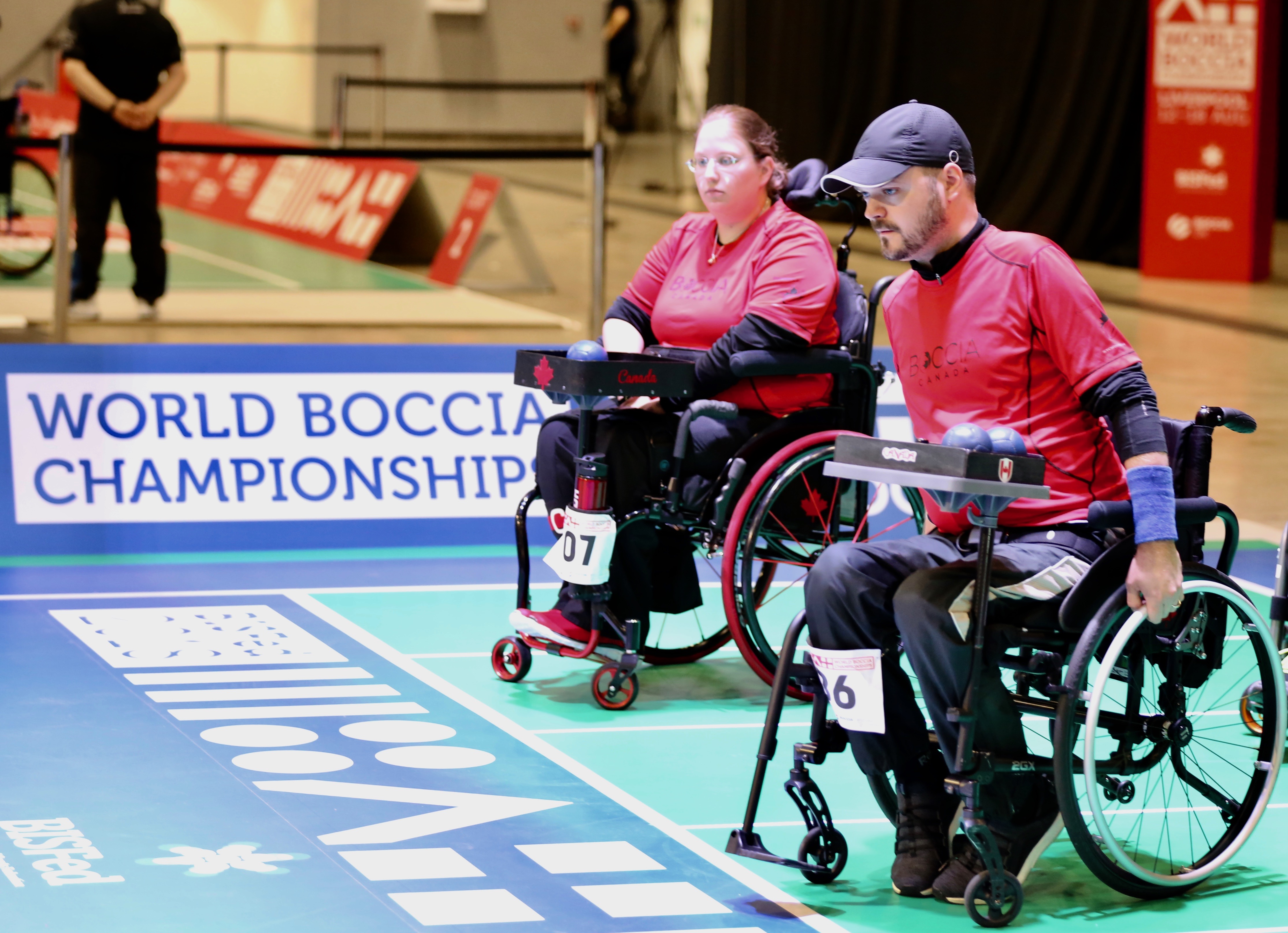 For the quarterfinals, BC4 coach Cesar Nicolai decided to start Ciobanu and Alison Levine (Côte-Saint-Luc, QC), referred to by the play-by-play announcer as an asset and a weapon for Team Canada. The elimination match was a demonstration of great tactical and strategical play, that only contributed to the increasing the level of tension.

The first end brought a tight cluster around the jack but a few mistakes from Canada allowed Germany to take a one-nothing lead. Admittedly it could have been much worse and Canada was fortunate that Germany was only able to take a single point. In the second end on his own jack, Ciobanu played a risky last shot that worked by the slimmest of margins, tying the match at one.

After giving-up another point to the Germans in the third end, the Canadians faced a deficit heading into the fourth and final end. Levine responded with a great push of the jack to allow Canada to stay in the game. Needing at least one point to send the match to an extra end, the Canadians were forced to make big game moves in a last push to stay alive in the competition. On his last ball, having taken a moment to reset after previously missing on two attempts, Ciobanu played a fantastic shot leaving Canada tying the one point needed. However Germany still had four balls left to play, and Boris Nicolai, on his first attempt nestled the ball closer to the jack and sealed the win, thus ending Team Canada’s run.

“It was difficult to lose this match, but we have to keep our heads held high”, affirmed Dispaltro. “One day it’s going to be Team Canada’s BC4 pairs turn to set foot on the podium. For today, it’s not mission accomplished, but we are so close to the promise land.”

Levine echoed Dispaltro’s thoughts. “Obviously we are feeling very disappointed right now.  It was a game that we could have definitely won. When you’re competing at the World Championships in the quarterfinals, you have to absolutely play your best to win and we didn’t today.”

Things are however looking positive for the future “We are moving up in the world rankings, and we are well positioned for the future and in particular for the Paralympic Games in 2020,” noted BC4 Coach Cesar Nicolai.

Head Coach Mario Delisle is proud of all the athletes and is encouraged for the future regardless of today loss. “We know that we can win against any team in the world.”

Team Canada’s competition at the World Championships ends, while the remaining teams will fight for medals in tomorrow’s finals.

Livestreaming of the event is available at, https://www.youtube.com/watch?v=5myD-vo0iXI. For a full list of today’s results, consult www.BISFed.com