Bussiere will be playing Jamie McCowan of Great Britain. It’s a chance at retribution for Bussiere, who lost to McCowan at their previous quarterfinal meeting in 2016.

“It’s going to be a serious match up this time around. I won’t make the same mistakes as I did then. I’m going to stay focused and try to build one point at a time.”

Ciobanu cemented his quarterfinal berth with a win against world number fifteen Robert Durkovic. It was a tightly fought game, with just millimetres between the balls, until Ciobanu made a move that “changed everything” in the second end. “I climbed the jack, took the point and control of the game. He tried with four balls to take back control, but he couldn’t.”

Ciobanu now faces Euclides Grisales of Colombia. It’s Ciobanu’s first time playing an athlete who has caused grief for other Canadian athletes since the 2015 Parapan Games and he’s looking forward to the challenge. 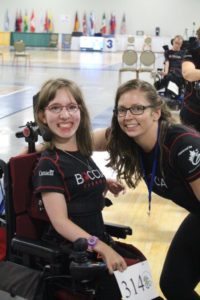 Teammate Levine advanced with a win over Japan’s Kintaro Fujii in her last game. She took control of the game early and never lost it.  Levine will meet unknown quantity Melisa Osmanovic of Croatia. “It should be interesting! Female power!”

For the rest of the team, “it was a tough day” said Delisle. “In some games we were close but we just weren’t able to finish the games.”

It was also a rough day for Marco Dispaltro (St. Jerome, QC), Adam Dukovich (London, ON) and Mike Mercer (St. John’s, NL), who played their best games of the tournament but didn’t see the results reflected on the score board.

The medal round takes place tomorrow. For a full schedule and results visit www.BISFed.com.