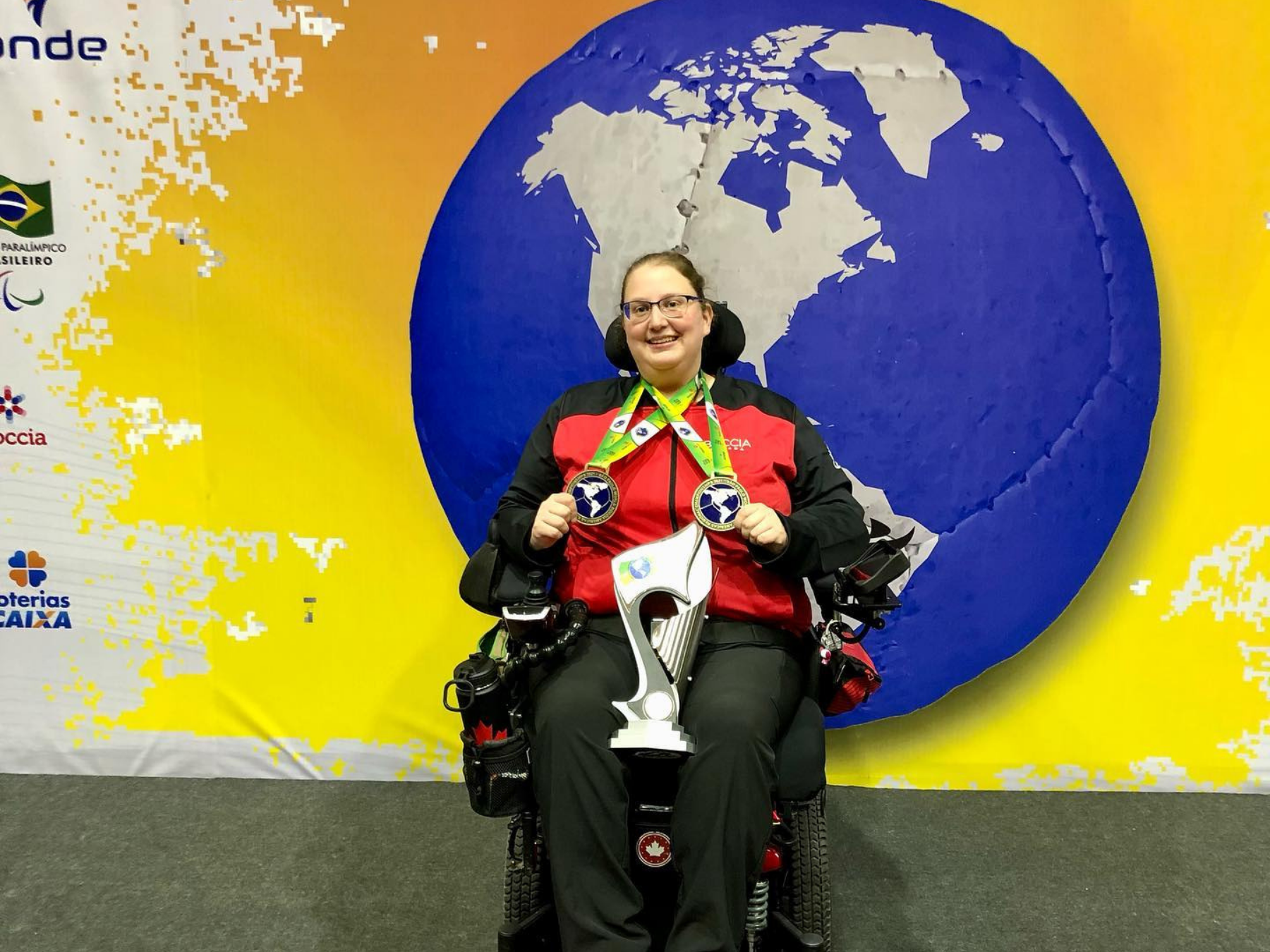 Alison Levine celebrates her back to back medals, leaving São Paulo undefeated in BC4 Individual Female and Pairs

São Paulo, Brazil (December 14, 2021) – The 2021 World Boccia Americas Regional Championships in São Paulo wrapped up on Monday with the Pairs and Team events. Canada leaves Brazil with a total of three bronze medals and two golds, including securing a 2022 World Boccia Championships spot for Alison Levine (Montréal, QC) in BC4 Female Individual, the BC4 Pairs which included Iulian Ciobanu (Montréal, QC) and Levine, and the Team BC1/2 which included Danik Allard (Bois-des-Filion, QC), Kristyn Collins (St. John’s, NL), and Lance Cryderman (Sudbury, ON). Levine, solid throughout the entire competition, went undefeated in both Individual Female and Pairs play, a first for the two-time Paralympian and number one ranked BC4 female athlete in the world. Despite the weight of a qualification for the 2022 World Championships, Levine and Ciobanu showed everyone why they are ones to beat in BC4 Pairs at the international level, taking down world number nine Colombia twice, and the eighth ranked Brazil. It was a back and forth gold medal match for the BC4 Pair but Canada had an edge against Colombia. With the score tied in the fourth, Levine smashed a cluster of balls in Canada’s favour to score two points leaving Colombia’s Leidy Chica Chica and Ciobanu with one ball left each to throw. Chica Chica missed on her last ball which meant that Canada had automatically won 4-2 without taking their last shot. The Team BC1/2 were able to secure their spot at the 2022 World Championships in Rio de Janeiro, taking bronze and a ton of confidence into their next international competition in 2022. Team BC1/2 athlete Allard who joined the National Boccia Training Squad in 2019 at 18 years old and qualified for the 2020 Tokyo Paralympic Games shortly thereafter, officially won his first medal in Team. “For me it’s always an honour to represent my country… I’m going to continue to make my country proud, work on my individual play, work on my team play, and we’ll see what comes next. It was thanks to my teammates that I was put in a place to score the last two points for Canada to win the bronze.” The BC3 Pair narrowly missed a chance to reach the semifinals with losses to Colombia and Peru in the round robin. The final score of the Peru game was 4-3 but the Colombia match was even tighter. Éric Bussière (Verchères, QC) and Joëlle Guérette (Montréal, QC), scored three points in the first and third ends for a final score of 6-6. A tiebreak end was played and it was down to Colombia’s last shot when they pushed their ball towards the jack to score one point. With that last push in overtime, Canada’s BC3 Pair was out of a chance to move on to the playoffs. Bussière previously claimed a bronze medal in BC3 Individual Male play earlier in the week.   Canada’s BC3 Coach, Simon Larouche observed that the level of play has improved in the Americas, which creates highly contested battles and tighter scores.    “We arrived [in São Paulo] with confidence. There were some new faces, which brought an unknown element to this competition… We played two close games [against Peru and Colombia] where little decisions made the difference. The level of play in the Americas has greatly improved… We had only one game left to win to be in the final four and affirm the spot at the World Championships.” The BC3s now set their sights on events in 2022 where they will have to improve their world ranking if they want to qualify for the 2024 Paris Paralympics. Head Coach Mario Delisle was happy with the overall results in São Paulo post COVID-19 pandemic which restricted Canada to not competing internationally for close to two years.“Considering that we are basically just coming back to competition, I am very happy with the performances achieved here at this Championships and obviously proud of the athletes because they have been working very hard along with their coaches who are always there to provide support. We are trying to build a team who can show up to any event and challenge the best in their class. This event is a confidence builder for what’s next for Team Canada.” The next potential international competition for Canada’s National Boccia Team is the Zagreb 2022 World Boccia Intercontinental Challenger from April 2 to 10 in Croatia. Boccia Canada will also compete in the Montréal 2022 World Boccia Cup from April 25 to May 1. For full results from the competition visit the World Boccia results page here. To watch the live medals ceremony visit the 2021 São Paulo Facebook group here.