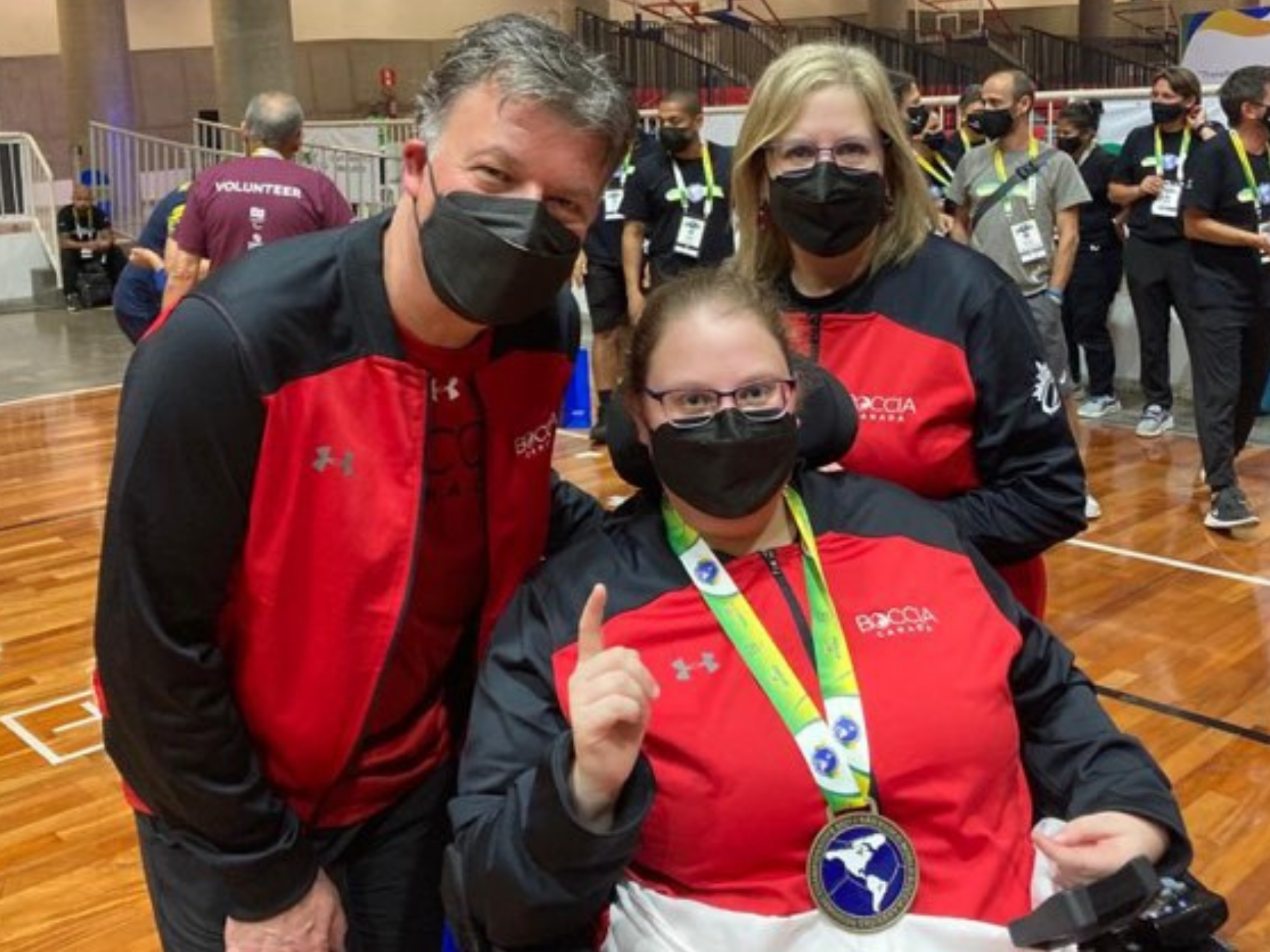 Levine went into the final undefeated against Leidy Chica Chica from Colombia who she previously beat in the round robin 9 to 3. She put together a fantastic performance in the gold medal match, playing very close to the jack, and used powerful displacements to move the opposition’s balls away from the target. In the first, second, and fourth end Levine nailed the jack several times giving her opponent no option but to deplete her balls. Going into the fourth end the score was 7-2 for Levine and Chica Chica could not recover. The final score was 8 to 2 for Levine. “I’m feeling very proud of myself for my performance here in Brazil… a secured spot for World Championships next year is a weight off my shoulders. All I can say is that today I proved why I’m number one in the world. I sent a strong message to everyone. I’m a force to be reckoned with.”   Levine’s Pair BC4 teammates, Dispaltro and Iulian Ciobanu (Montréal, QC), unfortunately had to play against each other in the bronze medal match, securing a medal for Canada after a successful round robin for both athletes. Dispaltro explains that the game came down to the first end.“Today I set the tone in the first end. I got lucky because I was trying to go for two points but the way the balls hit, I scored three. It’s very difficult to overcome three points in boccia when you’re up. I feel for Iulian. He’s my good friend and my teammate. I wish we could both get the bronze medal but that’s not the way it works… It’s always hard playing against a teammate.” Next up at this competition is the BC1/BC2 Team, BC3 Pairs, and BC4 Pairs play. The new World Boccia rules require a female athlete to be on the court during all ends of team and pairs play. Ciobanu will be joined by number one ranked BC4 female, Levine, to start this next part of the competition against Chile.“Since all countries have to play a male and a female in the pairs game, we have the advantage of being one of the best pairs in the world. [Alison and I] are ready and we have what it takes to make it to the podium in this next leg of the tournament.” In the BC3 male category, Bussière, stole a bronze medal from Cristobal Aranda of Chile. The turning point was the third end when he nailed the opponent’s open jack on his first roll, resulting in Aranda depleting his stock of balls to give Bussière two points. In the fourth end, Bussière nailed the jack again, resulting in another depletion. Bussière was left to close out the match scoring one more point for a final score of 4-1.  This 2021 World Boccia Americas Regional Championships is particularly important because a gold medal automatically qualifies the athlete for the 2022 World Championships next year in December. Bussière was very aware of that reality as he came into the tournament as the second seed. He has been the BC3 Champion in Canada for six years and is always a player to watch at international competitions.Despite the bronze, his loss to the Peruvian Dean Acosta in the semifinals was a hard pill to swallow for the reigning champion in the BC3 class: “After my loss yesterday I was a little disappointed… I’m happy but it’s hard to feel 100% satisfied without winning yesterday. Had I won, I would have had an automatic qualification to the World Championships and I knew I was capable of doing that. I’m definitely going to learn from this experience.” The BC1 and BC2s were able to pull through and played three games for bronze. Lance Cryderman (Sudbury, ON) and Lois Martin (St. John’s, NL) in BC1 male and female respectively, and Kristyn Collins (St. John’s, NL) in BC2 female. All three are considered top athletes in Canada who show good promise for the future of the National Boccia Team. Despite a loss for bronze, Collins was ready to accept the next challenge which is the BC1/BC2 Team competition. She will be joined by teammates Danik Allard (Bois-des-Filion, QC) and Cryderman in that category. Teammate Allard attended the 2020 Tokyo Paralympics however did not qualify for the elimination round in São Paulo.   “There’s still a lot to work on leading into the next competition. I feel great about competing alongside Lance and Danik. They’re really supportive, nice, and great teammates… Hopefully as a team we can collaborate and get comfortable with each other’s strengths and weaknesses. I think we have the potential to have some really good cohesion. I have my focus set on the next goal now.” All of the results from the individual, pairs, and team competition can be found here. The schedule can be found here. Note: game times are subject to change. The webcast is available on court 6 here.Check out Boccia Canada’s Facebook page and stories for all news updates about the livestream and schedule. BOCCIA CANADA’S TEAM AND PAIRS’ SELECTIONBC1/BC2 TeamDanik AllardKristyn CollinsLance Cryderman BC3 PairÉric BussièreJoëlle Guérette BC4 PairAlison LevineIulian Ciobanu