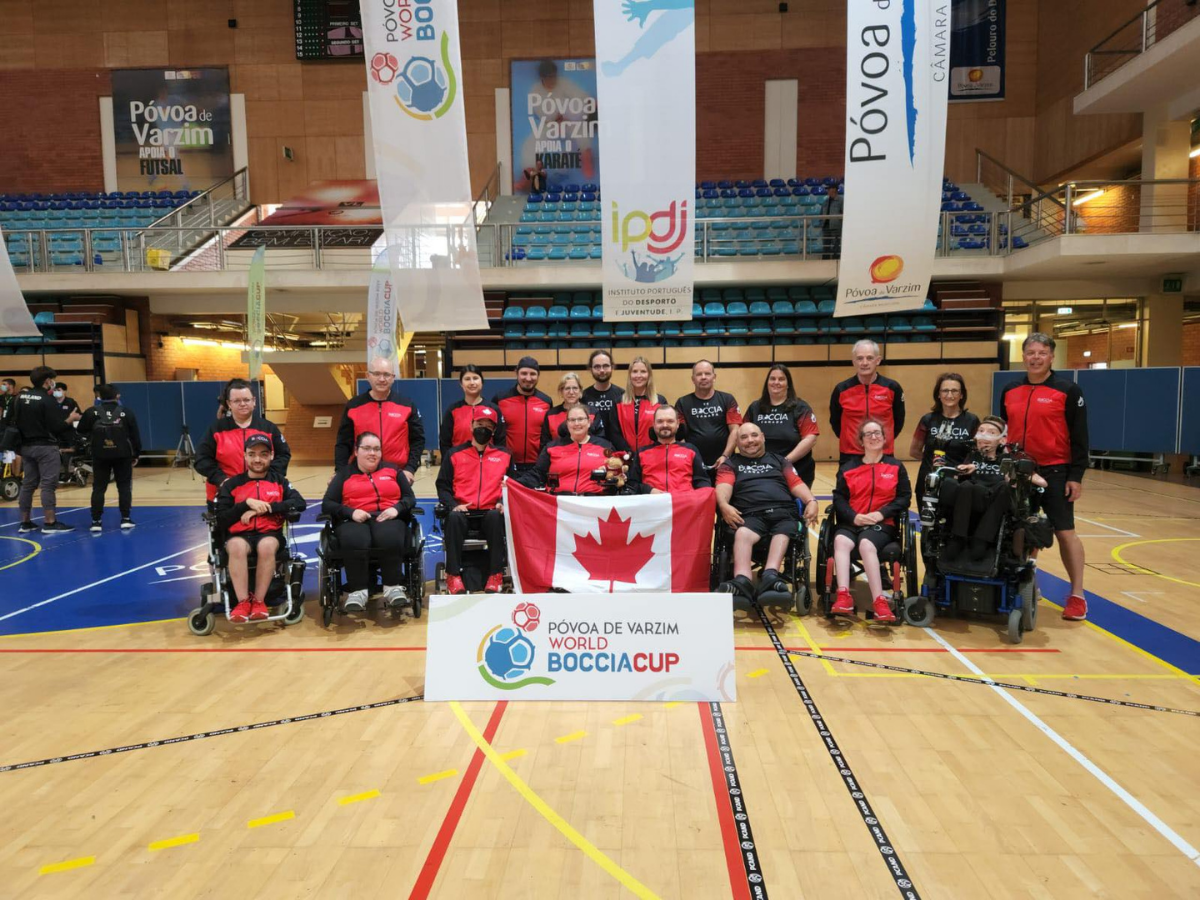 The team of athletes, performance partners, and staff representing Canada at the 2022 Povoa World Cup

Ottawa, ON (July 11, 2022) – Canada ended the Povoa World Cup on a high note with a bronze medal in BC4 pairs for Iulian Ciobanu (Montréal, QC) and Alison Levine (Montréal, QC). The BC1/BC2 team continued to show progress with a fifth place finish. The BC4 Pair earned the bronze by beating Portugal 5-4 after losing to Thailand in the semifinals. The semifinal loss came down to some key placement shots that would have given Canada a big lead. It was Levine’s second bronze of the tournament. “Coming back after that disappointing loss is something that we’re proud of,” said Levine. “I had a chance for two medals and two medals were brought home. Iulian and I had a great bronze medal game, by starting super strong and stealing two points on their jack. We put them in the position of a catch up the rest of the game and they were unsuccessful.” In the BC1/BC2 team category, Canada beat Spain and South Korea in the round robin. They qualified for the playoffs but, ultimately lost to Hong Kong in the knockout stage. Kristyn Collins (St. John’s, NL) showed off her abilities with two excellent shots in the first end of the Hong Kong game to give Canada the lead. In the end they lost 6-3, finishing fifth out of ten teams. High Performance Director Mario Delisle felt that the results show good promise for the future of the program: “I’m proud of everyone. It was a challenging event, but we are making significant progress and learning how to win.” Head Coach César Nicolai agreed, “I’m very happy with the performance of all the athletes. It shows that our program is solid and that we’re moving in the right direction. Week after week, month after month we’re getting more prepared for the Rio de Janeiro World Championships. A great satisfaction to have been able to come out with two medals.” The Rio de Janeiro World Championships is the next big international event for the Canadian BC4 Pairs and BC1/BC2 Team. The BC3 Pairs did not qualify for this event. To find a full list of up to date rankings visit the World Boccia site here. To follow the action at the 2022 Povoa de Varzim World Cup check out the Boccia Canada Facebook page here.