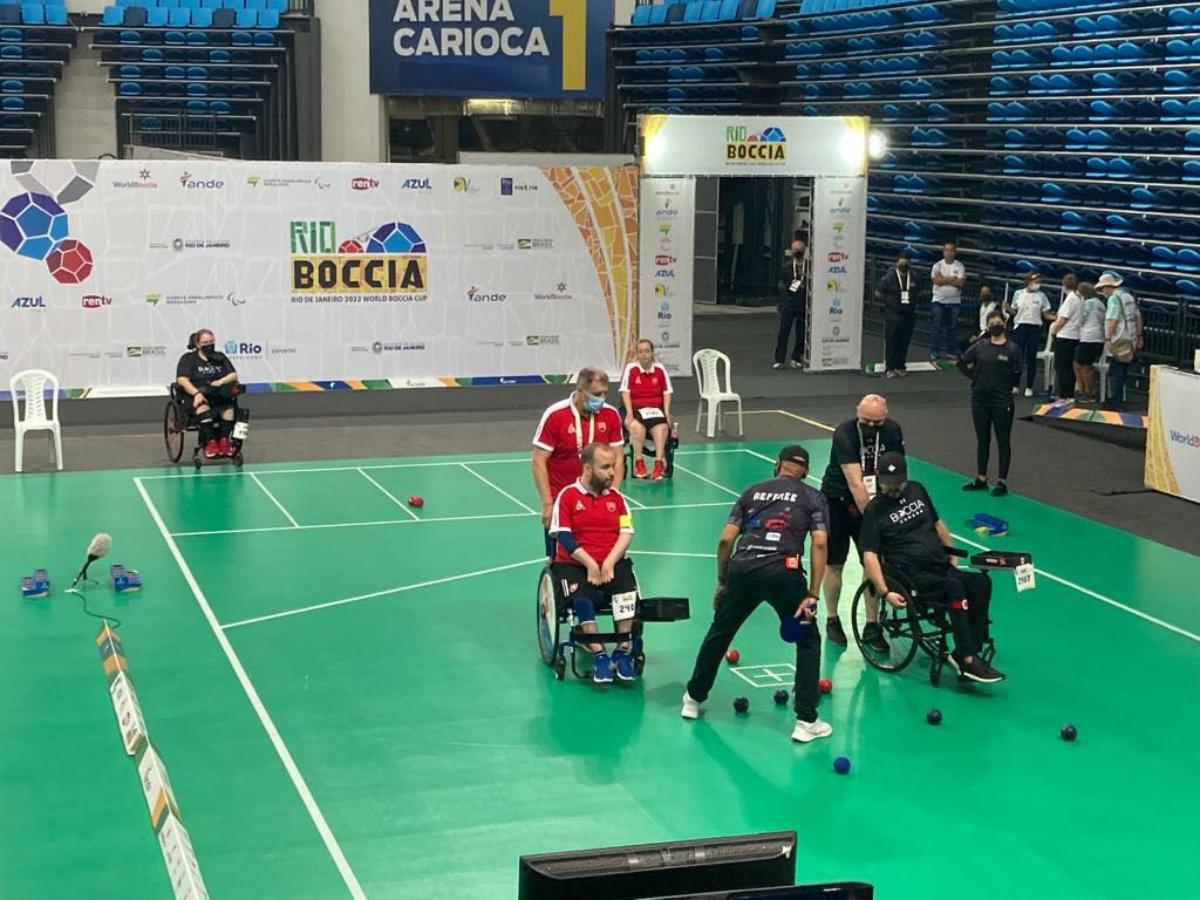 Canada and Slovakia in BC4 Pairs semi-final action in Rio de Janeiro, Brazil

Rio de Janeiro, Brazil (May 3, 2022) – The world number four ranked BC4 Pair of Alison Levine (Montréal, QC) and Iulian Ciobanu (Montréal, QC) lost on Monday in the bronze medal match at the 2022 Rio World Boccia Cup. Canada leaves the Team and Pairs competition empty handed but still have two medals in the individual portion to their name. Ciobanu and Levine finished top of their pool after the round robin portion defeating Germany and Portugal to qualify for the semifinals. There, they were against the number one ranked duo of Samuel Andrejcik and Michaela Balcova from Slovakia. With Slovakia holding a 4-1 edge going into the last end, Canada had an opportunity to steal a win. Slovakia had depleted their balls and Canada had four balls left to throw. Ciobanu had a great shot that pushed Slovakia’s ball out of play, scoring a total of two points with two balls left to throw. On his second to last ball, Ciobanu scored another point, effectively tying the match. In the end however, Canada was unable to score with the last ball, which lead to a tiebreak loss. Canada went on to face Croatia in the bronze medal game where they lost 4-2.   Ciobanu explained, “we learned a lot at this competition. We’re playing here again in December [at the Rio de Janeiro World Boccia Championships] so we were able to learn more about the climate, the court, and what we need to work on. This is a loss that we’ll definitely learn from.” The BC1/BC2 Team of Danik Allard (Bois-des-Filion, QC), Kristyn Collins (St. John’s, NL), and Lance Cryderman (Sudbury, ON) did not qualify for the playoffs after starting with two losses to Argentina and Brazil respectively, followed by a 7-6 win over France.    BC1/2 Team Coach, Ed Richardson took away some positives from the experience in Rio: “with each game we seemed to gain more momentum and confidence. Throughout the tournament we were able to collect some valuable information which we will use in training for upcoming events in the year, starting in Portugal, and then at the World Championships in Rio. I was very pleased with the team’s cohesion that built throughout the tournament and it will definitely be a building block for us moving forward.” In BC3 Pairs, the duo of Éric Bussière (Verchères, QC) and Marylou Martineau (Québec City, QC) also didn’t qualify for the playoffs after losing all of their games in the round robin.   Earlier in Rio, Levine claimed silver in BC4 Individual Female along with a bronze from Collins in BC2 Individual Female.   Head Coach, César Nicolai reflected on his experience in Rio de Janeiro: “The Canadian athletes have seen that they still have work to do to reach the top and podium. I am confident that the program has everything it needs to support them and help them improve so that they can perform in the future and ultimately, win medals.” The full results can be found here.  For full international rankings visit the World Boccia site here (will be updated post competition).