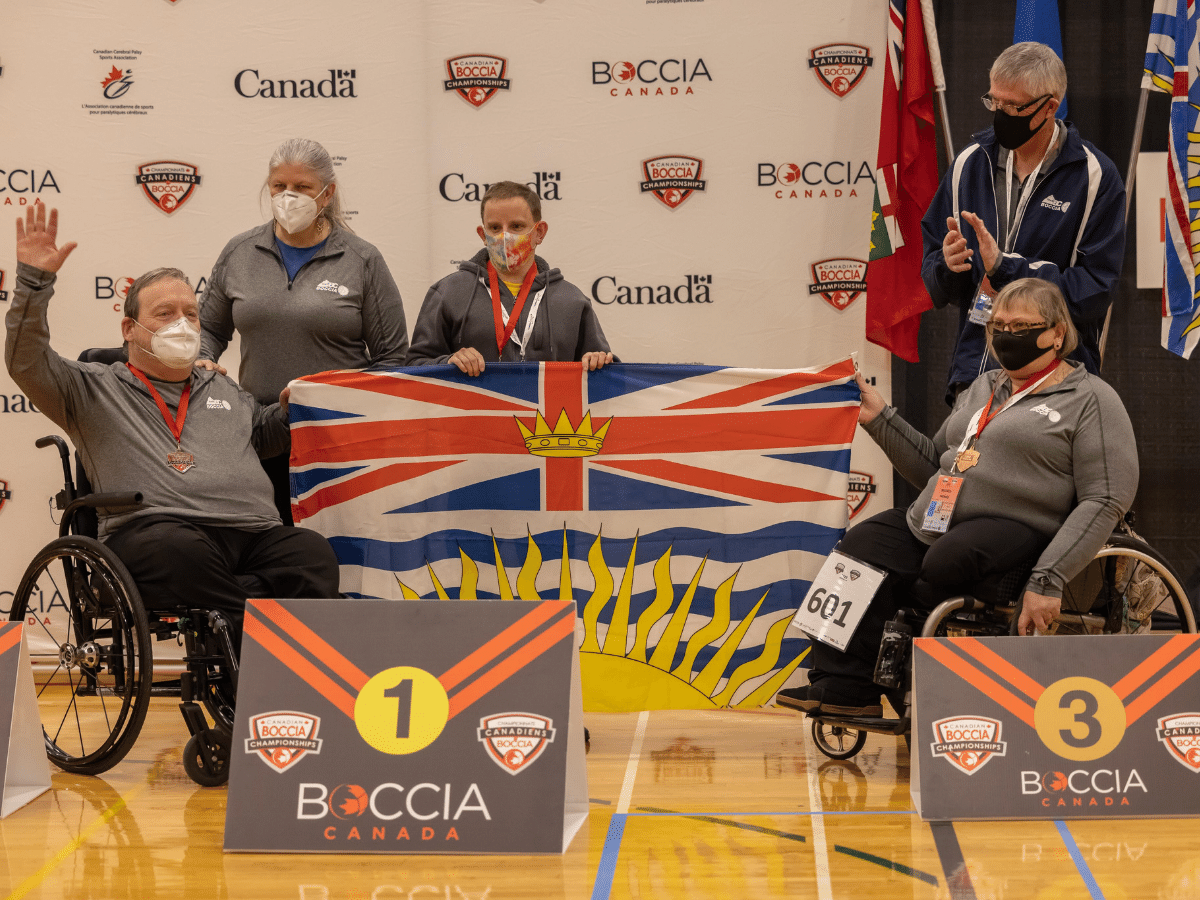 London, ON (November 20, 2022) – Remarkable performances from boccia athletes across Canada capped off the individual portion of the 2022 Canadian Boccia Championships. The BC2s were the largest class of athletes at this competition with athlete Nathan Bragg (Vancouver, BC) capturing his first silver medal in individual play at a Canadian Championships. “I had a really great competition. We had a lot of strong BC2s at this competition and I was really surprised and proud to come in and get a medal this year,” explained Bragg. Tokyo Paralympian and National Team member Danik Allard (Bois-des-Filion, QC) took the gold, winning every game in his class. “I’m very proud of how the competition went and I had no losses either. I’ve prepared a lot for this and my training with the National Team has helped this preparation greatly.” Teammates on the National Boccia Team and Paralympians Alison Levine (Montréal, QC), Iulian Ciobanu (Montréal, QC), and Marco Dispaltro (St.-Jérôme, QC) faced one another in the BC4 Class. Eventual winner Dispaltro was keen to give his teammates credit after two rounds of closely contested matches: “Here in Canada, you have to face the lions. Iulian is number eleventh, I’m number eight and Alison is third in the world. Alison ended up playing really strong and beat me and Iulian in the last two games to take the silver. Iulian has shown that he’s a very resilient competitor and I feel that he’s going to be ready for Rio in two weeks.” All three will be competing at the Rio de Janeiro 2022 World Boccia Championships, a critical international competition this year for the National Team. Another National Team athlete in BC1 class, Lance Cryderman (Sudbury, ON), took gold after going undefeated at the Nationals: “My performance this week has been consistent and I’m happy with the way I’ve played. When you win all six matches in the round robin you can’t complain too much. I had some pretty tight games including one against Hanif but was able to close it out today. I feel like I finally got the monkey off my back.” Hanif Mawji (Burnaby, BC) comes in second after being champion of his class for about two decades at the Canadian Championships. Chris Halpen (Victoria, BC) had another solid national performance and comes in a close third.   In the BC3 Class, Éric Bussière (Verchères, QC) won gold, Marylou Martineau (Québec City, QC) silver, and Ryan Rondeau (Edmonton, AB) bronze. This is the second year in a row that Martineau faced Bussière in a nail-biting finals. Martineau is happy to be on the podium and hopes to beat her fellow Québec teammate Bussière one day at the provincial and national level. Bussière has been a multiple Canadian Champion and stalwart in his class since 2015. Medals were awarded separately to BC5 and Open athletes in a mixed round robin format. In the Open class, wildcard athlete Dan Hutchison (Victoria, BC) took gold: “It feels great! I feel super happy to have beaten some players I’ve never beaten before. I’m happy to have won the gold and officially bring it back to BC!” British Columbia swept the Open category with Rene Poirier (Victoria, BC) receiving a silver medal and Mildred Thomas (Surrey, BC) a bronze. In the BC5 class, Giovanni De Sero (Guelph, ON) stood atop the podium: “To have the competitors from all over Canada competing was really special. I think being in Ontario, it makes the win a little sweeter… I think you’re always learning. You’re always taking something away from each tournament and bringing that back home with you.” Local athletes Alison McKee (London, ON) and Tom Mahoney (London, ON) have loved their experience at their first Canadian Championships as wildcard athletes in their hometown of London, Ontario.   “It’s Boccia-rrific! This wasn’t my first Championships, and it won’t be my last… I’m back and roaring to go.” said Mahoney. McKee echoed his sentiments: “It’s been an overall great experience. I’ve really enjoyed this competition and I’ve loved that my first Nationals was here in my home city…” Co-Chair of the Host Committee, Tammy McLeod (London, ON) noted, “the individual play was a huge success. The athletes put on a fierce competition. We are excited for Team and Pairs today and another awesome day of competition to see who comes out on top!” Find the livestream of the individuals medals ceremony here. Find all the results and schedule for tomorrow in Team and Pairs here. RESULTSBC1Gold: Lance Cryderman (Sudbury, QC)Silver: Hanif Mawji (Burnaby, BC)Bronze: Chris Halpen (Victoria, BC) BC2Gold: Danik Allard (Bois-des-Filion, QC)Silver: Nathan Bragg (Vancouver, BC)Bronze: Dave Richer (Montréal, QC) BC3Gold: Éric Bussière (Verchères, QC); Ass’t: Francine HébertSilver: Marylou Martineau (Québec City, QC); Ass’t: Josée DuquetteBronze: Ryan Rondeau (Edmonton, AB); Ass’t: Meghan Lewis BC4Gold: Marco Dispaltro (St.-Jérôme, QC)Silver: Alison Levine (Montréal, QC)Third: Iulian Ciobanu (Montréal, QC) BC5Gold: Giovanni De Sero (Guelph, ON)Second: Marc-Antoine Goupil (Honfleur, QC) OpenGold: Daniel Hutchison (Victoria, BC)Silver: Rene Poirier (Victoria, BC)Bronze: Mildred Thomas (Surrey, BC)