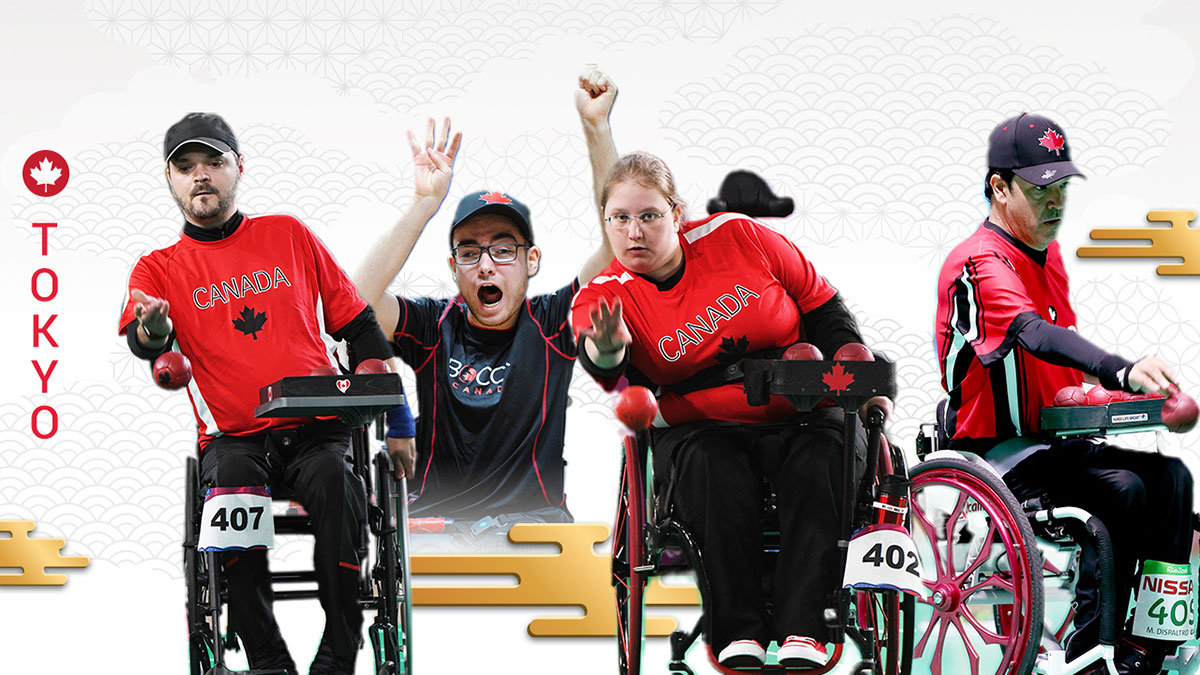 Ottawa, ON (June 11, 2021) – Canada will be represented by four athletes in the sport of boccia at the Tokyo 2020 Paralympic Games this summer, the Canadian Paralympic Committee (CPC) and Boccia Canada announced today.

Three BC4 athletes will be competing in Tokyo:

In 2019, the trio together captured a gold medal at the European World Open and a bronze at the Parapan Am Games in pairs competition. Danik Allard (Laval, QC) rounds out the team, with the up-and-coming BC2 athlete making his Paralympic debut.

A Rio 2016 Paralympian, Levine is currently No. 1 in the world in the BC4 individual rankings, which have been frozen since March 2020. She hit the top position in October 2019, the first woman in her classification to achieve the feat.

“It’s always an honour representing my country, but the Paralympic Games are extra special,” said Levine. “Being named to the Canadian Paralympic Team for a second time is an accomplishment achieved by very few so I am proud and can’t wait to compete!

“This past year so much has been taken from us that the simple act of competing again is what I’m most looking forward to. While I know these Games will be nothing like what I experienced in 2016, I’m still looking forward to giving it my all, showing the world what I’ve got, and making Canada proud.”

Dispaltro will be competing in his third Paralympic Games after London 2012 and Rio 2016. He is a former No. 1-ranked player and a Paralympic bronze medallist, earning the third podium position in BC4 pairs alongside Josh Vander Vies nine years ago. He most recently captured the BC4 individual gold medal at the Parapan Am Games in 2019.

“As an amateur athlete, the greatest honour for me is going to the Paralympic Games,” said Dispaltro. “It’s the event that brings us out of the shadows, it’s sport in its purest form, it’s the love of sport put on display. We are not often in the spotlight, so it’s a chance to demonstrate what we can do, to be seen, and to inspire young and old to dream what is possible!”

Ciobanu, a member of the Canadian team since 2015, will be competing in his second Paralympic Games, while this will be Allard’s first-ever appearance at a major multi-sport Games.

“I feel happy, proud and honoured to be given the opportunity to wear the maple leaf in front of the world,” said Ciobanu. “At these Games I hope to make new friends, receive medals, and have fun.”

“I am very proud of my personal accomplishment of being named to the Canadian Paralympic Team,” said Allard. “The most important thing for me is to make the most of this experience at my first Paralympic Games ever.”

A sport of focus, precision, and accuracy, boccia is one of two Paralympic sports that does not have an Olympic equivalent. Boccia is played on an indoor court with the goal being to propel balls towards the target or ‘jack’ ball. Athletes are awarded points for being closest to the target. The sport is contended in individual and pairs play, with athletes competing in four different classifications based on their level of disability.

Boccia competition in Tokyo will commence on August 28 and run till September 4.

“We are very happy with the qualification of four of our athletes for Tokyo,” said Mario Delisle, Canadian boccia team head coach. “Alison, Iulian, Marco and Danik worked very hard alongside coaches César [Nicolai] and Simon [Larouche] and their performance partners. They really deserve the chance to show off their skills against the world’s elite in Tokyo. Despite the many COVID measures in place for Tokyo and the fact no competitions have happened for close to two years, we hope everyone can find a way to perform to their expectations in an atmosphere full of fun and camaraderie. The podium is reachable if all goes well.”

Canada has won eight Paralympic medals in boccia in its history, the last one captured by Dispaltro and Vander Vies, a bronze in BC4 pairs at London 2012. Canada won three medals (two silvers and a bronze) in boccia’s Paralympic debut at the 1984 Games, two bronze at Sydney 2000, and a gold and bronze at Athens 2004. Paul Gauthier is Canada’s lone Paralympic boccia champion, winning the BC3 individual title in 2004.

“I am so pleased to welcome Danik, Iulian, Marco, and Alison to the Canadian Paralympic Team!” said Stephanie Dixon, chef de mission of the Tokyo 2020 Canadian Paralympic Team. “Boccia is a fantastic sport of great precision and technique unique to the Paralympics, and this is a strong Canadian squad. It will be exciting to see them compete in Tokyo this summer, and I’m really looking forward to cheering them on!”

*pending classification at the Games

The postponed Tokyo 2020 Paralympic Games will take place August 24 to September 5, 2021 in Japan. Canada is expecting to send a team of approximately 130 athletes, and audiences across the country will be able to follow all the action live through coverage from the Canadian Paralympic Media Consortium, including broadcast partners CBC/Radio-Canada, AMI, and Sportsnet, and digital partners Twitter, Facebook, and MXZN.

About the Canadian Paralympic Committee